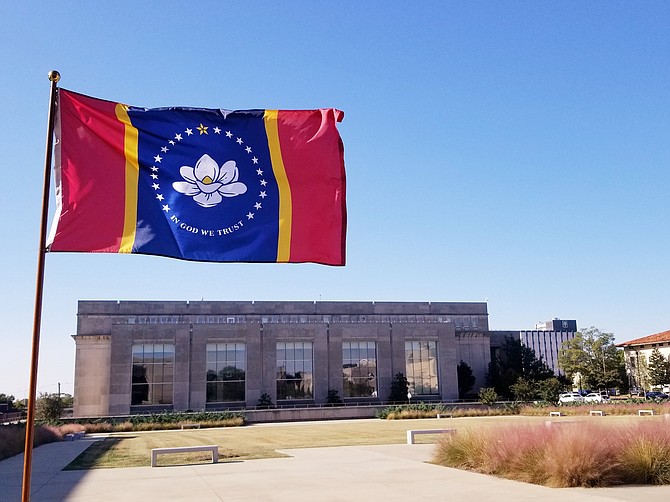 The first bill legislators passed and the governor signed this year has had an easy-to-see impact. House Bill 1 put the design of the new magnolia-themed state flag into law. Photo courtesy MDAH

JACKSON, Miss. (AP) — If spring pollen keeps you congested, if you're a 16-year-old enjoying freedom as a new driver or if you're hosting a party and running short of tequila for margaritas—and, ideally, you are not all those things at once—the Mississippi Legislature took action this year to affect your life.

Gov. Tate Reeves has already signed Senate Bill 2119, which will become law Jan. 1. It will eliminate the prescription requirement for decongestants containing ephedrine or pseudoephedrine. Under the new law, the medicine will be available behind the counter of pharmacies, and pharmacists will be required to keep track of how much is sold to one person.

Like many other states, Mississippi mandated a prescription years ago because drug enforcement agents said medications with ephedrine or pseudoephedrine were being used as an ingredient in crystal methamphetamine. Some consumers had complained that nonprescription decongestants were not strong enough. Mississippi Sen. Joey Fillingane, a Republican from Sumrall, told WDAM-TV that drug agents have seen an increase in crystal meth smuggled from other countries, and most states had already eased the prescription requirement for the decongestants.

New teenage drivers could also be affected by a change in state law, if Reeves signs House Bill 550. It would eliminate the requirement for a six-month intermediate driver's license between the one-year learner's permit and the regular license.

If Reeves signs House Bill 550, it would become law immediately.

House Bill 1135 is also awaiting a decision from the governor. It would allow home delivery of liquor, beer, wine or light spirits from local package stores or retailers. Buyers would have to prove they are at least 21, and delivery people would have to be at least that old. Deliveries could not be made to dry counties or cities. The plan would not allow home delivery from out-of-state vendors, so it's still not possible to join a wine-of-the-month club from a California winery.

Legislators started their 2021 session in early January and finished their work Thursday. The first bill they passed and the governor signed this year has had an easy-to-see impact. House Bill 1 put the design of the new magnolia-themed state flag into law.

The House and Senate voted last summer to retire a 126-year-old Mississippi banner that was the last state flag in the U.S. that included the Confederate battle emblem. They made the change amid pressure from sports, business and religious leaders as protests against racial injustice were happening across the nation.

Legislators created a commission to design a new Mississippi flag, mandating that it include the phrase, “In God We Trust.” By law, that single design was put on the November ballot for voters to accept or reject, and they accepted it by a wide margin. The new flag was raised over the Capitol during a ceremony in January, and it's now flying at government buildings, businesses and homes around the state.

Pocketbook issues were important during the legislative session. Reeves has already signed one bill authorizing a teacher pay raise and another bill increasing Mississippi's lowest-in-the-nation welfare payments for the first time in 21 years.

Legislators approved pay raises for other state employees, and department heads will decide who would get how much.