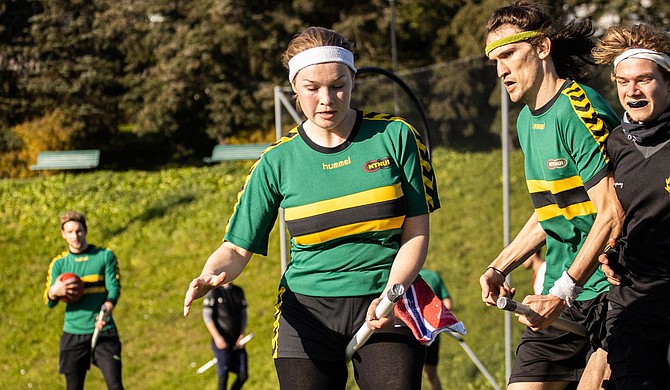 Quidditch is not only a real, full-contact sport that is popular on college campuses, but it is also alive in Jackson. The fantasy game originated from the pages of J.K. Rowling's "Harry Potter" series, but has since been adapted into a collegiate competition that has branched into a worldwide recreational sport. Enthusiasts like Jackson native Phillip Keck are attempting to keep the thrill alive through the COVID-19 pandemic.

Though a fledgling organization, Keck's Jackson Quidditch Association has joined this steadily growing, niche sphere of "muggle" quidditch. Keck hopes that with enough participants, the JQA will eventually be able to play alongside the scant number of quidditch teams in the South including at the University of Southern Mississippi, Louisiana State University and Loyola University in New Orleans.

During a phone interview on Oct. 21, Keck sounded cautiously optimistic about getting the organization up and running.

"I had a lot of momentum going forward. I created all of the social media accounts, and I was ready to create these events, but now I'm a bit discouraged. Though, I feel like if the pandemic begins to settle down a bit, I can get a team moving along," Keck explains.

For the unaware, quidditch (with a lowercase "q" as opposed to the fantastical Quidditch) is a full-contact sport that requires only cleats and a mouthguard to play, and borrows elements from both soccer and rugby. Those accustomed to the game in the books and movies will recognize the rules.

Two teams, seven on each side of the field, attempt to outscore one another by chucking the quaffle (a slightly deflated volleyball) through hoops while dodging thrown bludgers (in this case dodgeballs). Games have stretched on for hours while the specialized seekers chase the snitch (a tennis ball a neutral player carries).

Similar to basketball's handicap of dribbling, quidditch requires players to run with a broom (or any similar long, cylindrical object) between their legs. While onlookers often regard it as a hilarious spectacle, those who have played appreciate it as a fast-paced, heart-thrumming battle of athletes.

"I think it's a really, really cool sport," Keck says. "I really like the message that it builds, this message of inclusivity and equality. I just like the core principles of the game itself."

Like traditional college sports, team members and fans form tight association and monstrous fandoms around the institutional or locational teams they cheer for. Some of the most dedicated fan bases orbit around Texas-native teams Lone Star Quidditch, Austin Outlaws and University of Texas at Austin's four quidditch teams.

Unlike traditional sports, quidditch was built around rules that allow fair co-ed play. Teams are capped at only four members of the same gender on the field at once, a prominent rule that was shaped during the sport's beginnings. This very specific parameter keeps non-gender-conforming individuals safe on and off the field, providing a community of like-minded, equality-focused athletes.

This championing of inclusivity does not stop on a local scale, though, as several leagues and major competitions have steadily popped up around the globe and annually draw players together on an international scale.

Over the past 10 years, quidditch fanatics have enjoyed major competitions such as the European Cup, Asia Cup and International Quidditch Association World Cup, as well as semi-pro leagues such as America's Major League Quidditch and Europe's Quidditch Premier League. All of them offer the most highly skilled athletes a stage to compete for national rankings.

In the midst of the planning stages of the Jackson Quidditch Association, Keck had lofty goals for the team that would eventually branch into a Jackson league of quidditch teams. His dedication toward introducing quidditch to Jackson stems from his own achievements in the sport.

"I was getting my master's in Norway, and I randomly decided to go to this quidditch thing thinking that this would be pretty funny," he says. "I ended up playing for about a year, joining the Norwegian national team and going to the European Quidditch Cup, and was supposed to go to the World Cup—then COVID happened."

After landing back in the U.S., Keck was determined to start his own team in order to keep playing the sport that he had become infatuated with overseas.

"I had a lot of stuff going for me in just my first year (of playing quidditch), so I got really hyped for it and really wanted to keep playing," he says. I was the starting keeper (a quidditch position that mimics a traditional goalkeeper in soccer), a top scorer for our team. Now I'm back, and there's not really a team here, so I've taken it upon myself to create that team."

While in Norway, Keck and his teammates were not as burdened with quarantines and the viral spread as U.S. citizens have been. Well aware of the struggles that awaited him in the face of his endeavors, he plans to move one step at a time, even if those steps are miniscule in scope.

"I'm trying to get literally anyone who's interested to play," Keck explains. "... I'm pretty ambitious and like to set long-term goals, so I'm hoping in a few years that maybe we can build this up and create a whole league in Jackson and the surrounding areas. Though, I've had to take a step back, and now I'm going to try recruiting people individually."

"I'm just trying to get people over the presumptions of the sport. I definitely think the pandemic has not helped at all. I've had several people tell me that they would try it, except there's the COVID stuff going on. Though we are taking several safety precautions during practice."

Keck says that the team would follow the same safety precautions as his team in Norway had followed. Players would sanitize equipment before and after practice, with limited equipment sharing. They would keep the same brooms throughout, and pass to one or two partners. Additionally, practices would include as little contact as possible, and hand sanitizer would be in close proximity at all times.

Those following the realm of college sports are aware that there have been many victories and tragedies when dealing with COVID among team members. Games have been postponed or outright cancelled, players have opted out of the season, and schedules have been drastically gutted. Most NFL stadiums remain desolate with artificial crowds filling the cracks that the coronavirus has left.

For the cautious, though, sports during a pandemic seem possible, but as depicted ad nauseum, caution can only take a team so far.

A turbulent road lies ahead of Keck and the Jackson Quidditch Association in the form of an invisible, highly contagious opponent.

However, Keck's dedication and optimism spell good news for this budding organization and for the local spread of this fantastical sport. He hopes Jacksonians will soon be able to cheer for quidditch enthusiasts in their natural habitat—on broom, dodgeball in hand and a fiery determination electrifying their bodies.

For more information, find the Jackson Quidditch Association on Facebook.