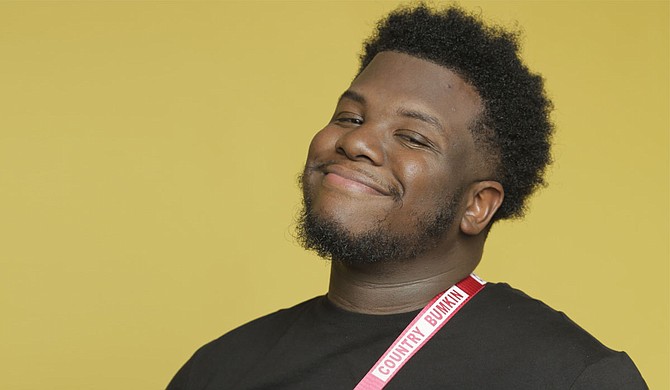 Treon Young, self-taught DJ and CEO of the fashion and lifestyle clothing line Country Bumkin, works to “create to the highest level” in every aspect of his life and career, avoiding shortcuts and executing a vision to the best of his ability.

Born in Greenville, Miss., Young’s family moved to Madison, Wis., for a year when he was 5 years old before moving again to Atlanta, Ga., where he spent his elementary-school years before eventually returning to Greenville after sixth grade.

“Growing up in Greenville was definitely different,” Young says, recalling that he felt there were few opportunities for success available in his home community.

Graduating from Ray Brooks High School in 2014, Young went on to study at Jackson State University for three years, the campus serving as a fertile ground that allowed his creativity to flourish. As a DJ, he performed at basketball games and Greek-life events.

In October 2016, Young debuted 10 original T-shirts emblazoned with his own designs to gauge interest for an urban fashion line. All 10 shirts sold the same day, and with this encouragement, Young decided to pursue the idea.

“Country Bumkin started with me wanting to give the South something to embrace,” Young says. The brand focuses on expressing an uplifting aspect of the southern story to encourage southerners to take pride in their home and culture.

“I want to be able to give the story of Mississippi as a fun place,” Young says, “It’s not bad being from the country. It’s actually cool.”

After researching and honing his craft for three years, Young opened a Country Bumkin retail space at Northpark Mall on February 15, 2019. Three months later, he married his wife, Leslie.

Young describes owning and managing a storefront for his creation as a learning process. His initial investment of $3,000 turned into $100,000 gross income by the first week of December 2019. However, just as business looked promising, the COVID-19 pandemic posed a new challenge.

“COVID-19 actually hit me before it hit America,” Young explains, “because I was getting a lot of my clothes from China.”

As manufacturing in China ceased and the pandemic spread to America, fewer people visited his store. “People weren’t just jumping to buy clothes,” he says. The 2019 holiday season, which he had eagerly anticipated, ended up being one of his slowest and least profitable months.

The philosophy of the brand and the support of the community keeps Young going, though, as a number of seniors and young people continue to shop at his store and enjoy his creations.

As a young Black business owner, Young believes his position can inspire others.

“People that are in their 20s can walk into my store and see someone who looks like them, talks like them, and have a business conversation,” he says.

The continued community interest in his business motivates him to work further, and he aspires to in turn inspire members of the community to likewise follow their passions and find success.

During the period of quarantining in Mississippi, Young pushed his creativity into a new venture, designing a 3D-animated cartoon with his brother-in-law.

“The graphics on it are just as good as anything Disney makes,” he says.

Though he is still writing the finishing touches, Young says the cartoon will tell the story of Mississippi in an urban setting, and he hopes to pitch it to a production company once he completes it.

While sales at Country Bumkin are not as high as they once were, business has improved since the pandemic began, and Young is hopeful for the day when life and business can return to the realm of normalcy.

“Right now,” he says, “all I can do is drop content and keep people engaged until things get better.”

To learn more about the Country Bumkin brand, visit buycountrybumkin.com or find the business on Facebook or on Instagram at @shopcountrybumkin.