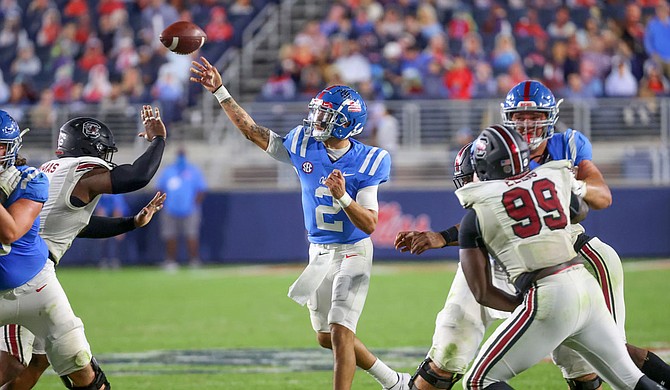 Trailing 42-38, Corral found a wide-open Moore waiting in the middle of the field at the South Carolina 45-yard line. Moore then turned and raced into the end zone to put Ole Miss ahead to stay, 45-42 with 12:02 remaining.

During the play, Ole Miss coach Lane Kiffin tossed his clipboard 20 yards in the air at the catch and ran along the sideline 30 yards before stopping to celebrate with a fist pump as Moore completed the game’s decisive play.

“I get excited when players make plays,” Kiffin said, who gave credit to Corral for making the correct audible on the touchdown. “When you see the play call, the audible and the defense doesn’t switch out, I just get really excited.”

Moore was surprised to break free and more surprised at his coach’s response. “They had a miscommunication back there. Matt just saw me,” Moore said. “I really didn’t know coach (Kiffin) was doing that (on the sideline). It’s great to know your coach has the juice and when we score, he scores.”

Ole Miss (3-4, 3-4 Southeastern Conference) finished with 708 yards of offense, the most in school history in an SEC game. Corral finished 28 of 32 for 513 yards passing, a school record, including four touchdowns. Corral added a 3-yard touchdown run, while Jerrion Ealy rushed for 84 yards on 17 carries with touchdown runs of 12 and 5 yards.

“Since I’ve been playing here, probably not. I just didn’t want to mess up the throw,” said Corral when asked if he had ever had a receiver that open on a deep route. “That kid (Moore) is special. He belongs in the NFL.”

Moore had 13 receptions for 225 yards, including touchdown catches of 91 and 25 yards, both during the fourth-quarter surge. Lakia Henry had 10 tackles and A.J. Finley had an interception as Ole Miss stopped the final three South Carolina offensive series.

“Awesome win. Quality opponent. It was really cool to see the defense make plays at the end,” Kiffin said. “You’re looking at some amazing football with Matt (Corral) and Elijah (Moore). The statistics are just ridiculous for Matt. Elijah is just really special and such a cool kid, too.”

“They’ve (Ole Miss offense) done that to a lot of people,” South Carolina coach Will Muschamp said. “It (South Carolina defense) is concerning. No doubt about that.”

Collin Hill was 17 of 28 for 230 yards passing with an 11-yard touchdown pass to Shi Smith, who finished with 10 receptions for 117 yards. South Carolina had 548 yards of total offense and linebacker Ernest Jones had a game-high 18 tackles.

South Carolina: The noise surrounding the coaching future of Will Muschamp figures to increase. The Gamecocks finish November with two home games that will go a long way in determining postseason hopes and Muschamp’s job status.

Ole Miss: The win checked off a few important boxes, including the first win at home and consecutive wins for the first time this season. With three games remaining, Ole Miss is still in the postseason bowl picture with an opportunity to finish .500 or better. The offense was 7 of 8 in the red zone and 4 of 4 on fourth-down conversions.

With wins against Vanderbilt and South Carolina, Corral is 59-of-66 passing for 925 yards with 10 touchdown passes and no interceptions, a passer efficiency rating of 257.12. Moore has 27 receptions for 463 yards and five touchdowns, plus six rushes for 45 yards. The Rebels have scored 113 points in those two wins.

South Carolina: The Gamecocks host Missouri Saturday in the first of a two-game home stand.

Ole Miss: The Rebels visit No. 5 Texas A&M on Saturday.