“We Shall…” Encourages Mississippians to Unify at the Polls | Jackson Free Press | Jackson, MS

“We Shall…” Encourages Mississippians to Unify at the Polls 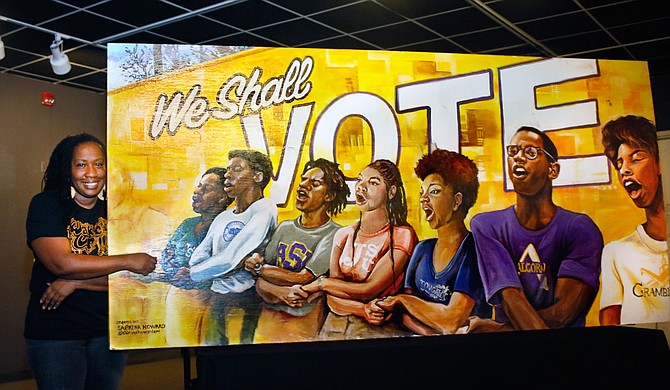 Sabrina Howard poses with her “We Shall…” mural, which is one of six murals included in the local “#ArtofVoting” series. Photo courtesy Sabrina Howard

Artist Sabrina Howard stands proudly by a brightly painted mural. Her thoughts turn to her father who often told her stories of how he faced numerous practices and tests designed to keep him from registering to vote.

"His fight continued, and once registered, he never missed an election or voting opportunity," she says. "My father has always made voting a priority and stressed the importance of it."

Her latest mural "We Shall..." honors Howard's father and the many others whose determination helped change the voting landscape.

The piece features seven men and women of color with the interlocked arms commonly seen during the Civil Rights Movement.

Their mouths are open in song, and the words "We shall VOTE" appear against the bright yellow background. The spiritual song "We Shall Overcome," often sung during civil-rights protests in Mississippi and other southern states, inspired both the text and imagery displayed in the artwork.

"I replaced the word 'overcome' with 'vote' because in a way, as is happening now, because of people voting there are situations and elections that are going to be overcome by an overwhelming voice," Howard says.

"During the Civil Rights Movement, there were a lot of young college students that were heading up the marches and participating," Howard says. "(The mural) shows the youth of those historically black colleges coming together and lifting their voices to stand for voting rights."

Howard believes that the piece speaks to college-age voters on a deeper level.

"I hope that this piece reaches the students to show that it's not about where you are or what college you attend. It's not a competitive thing," she says. "Voting is a unifier. We have the opportunity to lift our voices through those ballots."

Howard's mural was installed at Alcorn State University just days before the November 2020 election. The other five murals are installed at  Tougaloo College, Jackson State University, the Jackson Medical Mall, Methodist Rehabilitation Center and the Mississippi Arts Center. In January, the six murals will be installed in a group display in the metro before being placed in their respective permanent locations.