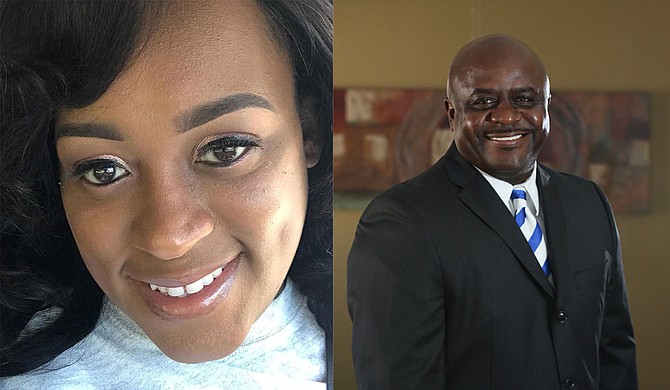 The City of Jackson has appointed Shenakia Mosley as council clerk, and John Carroll Sr, as chief deputy clerk, following the recent creation of those positions.

Mosley, an alumnus of Raymond High School and Holmes Community College, is a native of Bolton and Edwards. She was the certified deputy city clerk for the City of Jackson until her new appointment and before then was the interim town clerk for Edwards.

Carroll served as a clerk in the City of Canton and assistant city clerk in the City of Vicksburg before the new appointment. He attended Los Angeles City College, Jackson State University Institute of Government Public Management and Leadership Program, and Center of Governmental Training and Technology Mississippi State University Extension Service. He is a Certified Municipal Clerk and Tax Collector and Certified National Business Bureau of Licensing Officer.

The city council praised the duo, introduced at its special meeting Tuesday, for their display of competence in just one week on the job. The president of the council, Ward 7 Councilwoman Virgi Linsday commended Mosley and Carroll for working well together.

"We know that they are already working seamlessly as a team to take care of the needs of the legislative branch of our government," she said. "Thank you very much for joining us, and we look forward to working with you."

Ward 5 Councilman Charles H. Tillman said that as a member of the interviewing committee, he is pleased with the appointment because they not only have the needed skills, but he judged that they also have the demeanor to work with people from varying backgrounds. He said one of the things he looked for during the interview was community-services skills.

Mayor Chokwe A. Lumumba congratulated the clerk and the chief deputy clerk. "We think that they have made a wonderful selection and we look forward to working with you," he said.

The Hinds County Board of Supervisors has approved the replacement of the air-conditioning piping at Raymond Courthouse Annex Central after water flooded the first floor and basement.

The motion passed at the May 18 special meeting of the board where the County Administrator Jennifer Riley-Collins said the major repair requires ripping out and replacing pipes all over the building.

District 4 Supervisor Vern O. Gavin told the Jackson Free Press by phone that the budget for the project is $62,000 based on information provided at the previous supervisors meeting.

Gavin said because of the building's historic nature (first built in 1857) the Department of Archives and Records needs to approve the plan.

"There is a lot of water draining into the building; the first floor and the basement are saturated with water from the pipes in the AC. There is also an indication that the roof could have water damage as well." he said. "We stopped the water by cutting off the air-conditioning unit. Now, as we are coming into the heat season, the summer, we are going to have to get those units turned back on. To do that, we have to repair those pipes or replace them."

The window units installed as a temporary measure, he said, would not be sufficient in the summer, when "the heat goes into the 90s. It is not going to be sufficient to keep that building cool. It's an old building, which requires a centralized system."

The board also agreed to replace the culvert located at 1340 Hodge Lane in Edwards, a town in Hinds County. The project, which Hinds County Public Works will execute in the town of 1,000 people, also includes repairing rails on both sides of the culvert and cleaning a ditch along the lane. Funding for the project comes from money already available through the 2017 bond allocation.

Also, the board reallocated $200,000 of the 2017 bond allocation to pay to replace the Cynthia Road bridge in Clinton.

The county administrator requested approval for the appointment of Attorney Micheal Gorden as law clerk for Hinds County Senior Circuit Judge Tomie Green, effective May 2020. The unanimous consent also set compensation for the attorney at $46,155 per annum.