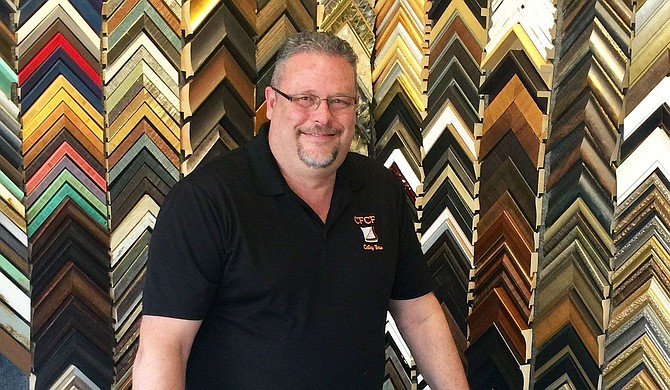 Working nights at a crafting business would often be so slow that Calby Boss found himself in the store’s frame shop experimenting with different mats and frames. There, in the back room of the store, a new passion and career was born. Thirty-six years later, Boss continues to provide beautifully crafted frames to area residents.

“At the time in New Mexico, southwest-style mat cutting was a really big thing. I learned how to cut mats that had really pretty designs cut into them, and that was fun to me,” Boss says.

The Ruidiso, N.M., native opened his first frame shop in Roswell, N.M., in 1984. There he mastered the popular southwest matting style and created hundreds if not thousands of frames for people across the area, he says.

In 2010 Boss relocated to Flowood and began working at Brown’s Fine Art and Framing in Fondren as the frame-shop manager. He opened Calby’s Fine Custom Framing, LLC in Flowood in May 2018 and has quickly built it into a local staple.

Boss, a history lover, says the art of framing continues a centuries-old profession. “Framing has been around a long time,” he says. “Each period—the Renaissance, Gothic or whatever—is also reflected in framing. Each period has signature framings to keep it in that look.”

Calby’s crafts custom frames from varying materials including wood, museum glass, conservation glass and more. In addition to frames for pictures and art, Boss creates items such as shadow boxes, acrylic boxes and platforms for object framing. He also offers French matting, which is a type of matting used for art painted on paper as opposed to canvas where panels and lines are painted on a single mat to give the impression that multiple mats are present.

Acid-free matting and backing ensure that anything touching the art remains free of damage. Boss cuts, joins and sizes the frames specifically for each individual work. Boss believes that the frames serve as an enhancement to the art they hold.

“We don’t want to have a painting on the wall and (have a person say), ‘Oh, that’s a great frame.’ The frame is supposed to be secondary and enhance the artwork,” Boss says. “That’s the key to making a nice piece, making it complement the art instead of taking over and becoming the first thing you see.”

However, Boss still believes that the frames themselves are also a work of art. “You can make or break a piece of art by the frame that you put on it,” he says.

In addition to framing, Boss offers several other types of services including art and photograph restoration and photo imprints on metal, acrylic or canvas. He also replaces broken mirrors with antique mirrors or new mirrors, or can custom an antique mirror to your liking.

Boss’ eye for framing is only one part of his artistic ability. The painter says he was “born with a crayon in hand” and began drawing and painting at an early age. While in New Mexico, he developed a southwest style creating Amerindian and western art, but later transitioned into his now modern style after a move to Dallas, Texas.

His creations include colorful abstract and contemporary pieces using multiple mediums such as acrylic, watercolor, pastel, chalk pastels, charcoal and pencil. His most recent piece was a 30-by-40 work featuring a crab on a seashore. He, of course, framed it for its new owner.

Boss says he hopes that his work brings joy to local homes.

“A great work of art professionally framed would go in a prominent place in a home, and (the owner) would be proud to show off anytime anybody came to see them that they have something nice on their walls,” the framer says.

To learn more about the business, visit its website at calbysfinecustomframing.com. Due to the COVID-19 outbreak, the physical store is closed, but customers can call 972-955-9856 to set up an appointment.