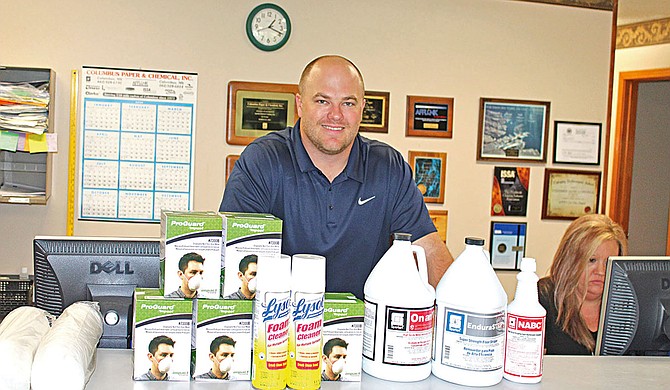 COLUMBUS, Miss. (AP) — First they came for the hand sanitizer. Then the disinfectant. Then the toilet paper.

By Friday afternoon (March 14), customers were accosting sales representative E.J. Nolen in the back parking lot of Columbus Paper and Chemical for those basic supplies.

Nolen had to turn them away.

"It's been crazy," Nolen said. "I've not ever seen it this wild since I've been here. ... It's just been nonstop. But we're trying to do the best we can to get what we can in."

Because of the COVID-19 coronavirus outbreak, hand sanitizer "flew off the shelves" of the warehouse for the janitorial supplies wholesaler on Military Road, and Nolen said there's little hope of getting another shipment before April, maybe even early May. While shipments of toilet paper, paper towels and hand soap are still coming on schedule, those products are "selling a lot faster than they normally would."

"We've got hotels that would normally get a case or so of toilet paper (a week) that are wanting to get four or five (cases) at a time now," he said.

All this has Nolen fielding calls and texts from clients as early as 7:30 each morning and sifting through emails for an hour or more after "quitting time" each evening. Meanwhile, the office front desk staff is fielding hundreds of phone and in-person requests from individual customers daily.

Nolen admits he looks forward to a "return to normal," the third-generation member of his family's than 50-year-old business is learning that some unpredictability comes with the territory.

Nolen's grandfather, Jimmy Nolen, cofounded what is now Columbus Paper and Chemical in 1967 and became the sole owner by 1976. By the late 1980s, E.J.'s father, now company president Tim Nolen, joined the business, which he and Jimmy ran together until Jimmy retired in 2019.

E.J. started working in the company's warehouse during summers in high school, and after a year in junior college , he took on the sales representative job full-time in 2008.

"I grew up in this. It means a lot to me because it's all I've known for most of my life," he added. "There aren't many jobs where you get to go around and meet new people all the time. ... After (Tim) goes home, I'll still be here, hopefully."

Columbus Paper and Chemical delivers to commercial clients -- hotels, schools, nursing homes, etc. -- within a 150-mile radius of Columbus and has a regular trickle of individuals that come to the office to purchase household items even when there's not a global pandemic. That includes cleaning supplies, as well as everything from copy paper, paper towels and toilet paper to foam plates and cups.

E.J.'s personality suits his role at the family business well as he recruits clients all across his service area. And while the idea of having to refuse certain sales in the current crisis doesn't really sit well with E.J. -- though most other businesses like Columbus Paper and Chemical are seeing the same issues nationwide -- the fact local customers are looking to a local business means everything.

"It means a lot to us to know people want to ship local," he said. "We try to take care of our local folks the best we can."

As for the prospect of a fourth generation taking on the family business, that would one day fall to one of E.J.'s daughters, now 3 years and 11 months, respectively.