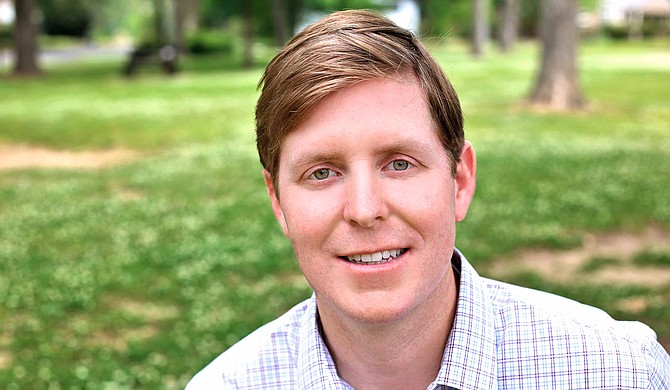 In the case of Andy Frame, the adage about the journey being more worthwhile than the destination is an apropos description. He never envisioned where he would be right now, in terms of both employment and residence. He’s one of those people who pauses when you ask where they are from, since ‘from’ can be a fluid word if you’ve lived in several places throughout your life.

Born in Jacksonville, Flo., Frame spent his teenage years in Georgia before attending Auburn University in Alabama, where he earned a bachelor’s degree in journalism in 2003. At one point, he ended up in Athens where he met his wife, Anna Purvis, who happened to be from Jackson. However, he never considered moving to Mississippi a possibility at the time.

During the aftermath of the 2008 recession, Frame left a real estate job after properties were no longer selling. He decided to enroll in the Mississippi College School of Law because he had connections to the school through Anna’s family. “I told my friends back in Georgia I’d be back,” he said. However, the more he thought about it, the more settling in Mississippi and being close to family, including Anna’s family, seemed to make sense given his background, and he developed stronger roots. “I’ve lived in a lot of places, so (I figured) let’s try another one.” Frame’s parents moved to the Jackson area later on to be closer to their grandchildren.

He expanded his law school credentials after graduation from MC Law by attending the University of Arkansas to achieve a Master of Laws degree in agriculture and food law. At a law firm in Jackson he happened upon a pro bono case representing retired doctor Jim Johnston. Johnston was interested in cleaning up abandoned and vacant properties, but needed help navigating city and state government as well as Jackson State University and its properties.

Researching and learning more about Johnston’s problems endeared him to the doctor’s optimism, which furthered his interest in the potential for residential remediations across the city. “It became a passion for me. I worked at the law firm for four years and that passion started to grow after a couple years. About three years in, I helped Jim establish Revitalize Mississippi, obtain the necessary non-profit designation (and) create a charitable trust. At the end Jim asked me to come work for him because he needed someone who could just step in and know what to do. Having a law background helped, too.”

Frame celebrates his third anniversary with the organization this year and continues the critical work of the company. Revitalize Mississippi’s mission is to clean up Jackson. Of course, the particulars of said clean-up can be mired in legal entanglements.

Revitalize Mississippi primarily targets properties that had previously been condemned by the city, a legal designation the city applies to properties that effectively means that they are beyond rehab and have become hazards and nuisances for a community.

Through Revitalize Mississippi, Frame often focuses on either outright deconstruction or vegetative removal, both aiming to increase specific and adjacent property values.

“If properties can just sit there and fall to disrepair, they start to attract crime, pests, and people don’t want to live next to them. They encourage people to move away from the neighborhood, something we are trying very hard to fight against,” Frame says.

The more time and work Frame contributed to the company, he says, the deeper his understanding became of the importance surrounding communal involvement when removing blight.

“Eyesore properties are often brought to our attention by residents,” Frame says. After Revitalize Mississippi has worked on a property, it tries “to find people who are interested in acquiring, purchasing, the lots from the State of Mississippi after we clean them up.”

To this day the organization has cleaned up more than 600 properties and demolished structures on more than 150 of the total.

“We partnered with the Jackson Association of Neighborhoods, where I am vice president of the board, to work on a city-wide plan, help them organize and further extend community outreach,” he says. “The more people I meet in this city, the more convinced I am that moving here was a great idea all along.”

In the wake of COVID-19, Revitalize Mississippi will suspend demolitions and lot clearings for the time being. The organization is currently reviewing what it can do during the shutdowns and hope to resume its operations as soon as possible.

He and Anna have been married for eight going on nine years and have two children, Sybil, 6, and Davis, 4. Outside of work, Frame enjoys cooking for his family and going to see live music when he can, as well as traveling and being outdoors..