Katy Simpson Smith on ‘The Everlasting’ 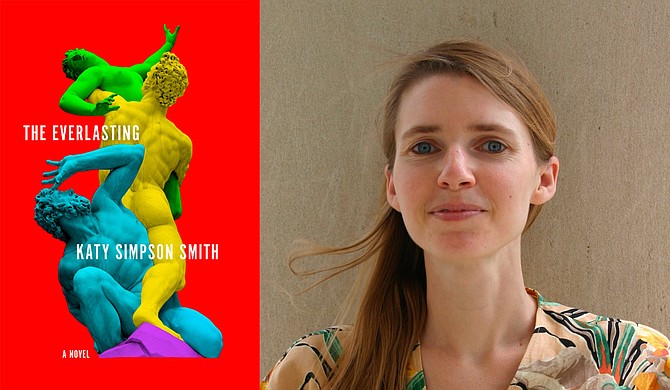 Jackson native Katy Simpson Smith's third novel "The Everlasting" is, at its core, a centuries-long story of love and equality. Four distinct characters, separated by time, find themselves in precarious tangles with not only the main setting of the novel, Rome, but also within themselves. Smith, an expert in history, offers questions surrounding topics such as salvaging a doomed marriage for the sake of one's child, abortion within a Roman royal court and being a gay corpse preserver.

Smith recently talked about what went into writing this incredibly ambitious narrative.

I would like to start before the book even begins. Can you talk about the very striking dedication, "To the Boys," that you wrote at the beginning of the book?

Yeah, no one's ever asked me about the dedication. It is both a cry and complaint against the way that masculinity so often performs in our society, but it also ... invite(s) men into this world and asks them to participate in it. So, it's loving and a little bit admonishing, I think. And I wrote this book, in some way, to all the boys that I know.

This is a woman's novel in the best ways possible. It's powerful for women, for their sexual desires, so going off of that, why Tom? I found him—and maybe from my severe projection onto your character—to be the most interesting character, ironically, despite his section being very modern. How you implanted his story among these ancient tales is very exciting to me.

Tom was, I think, the hardest character for me to write. That's the thing; he's living in my era, so I should know where he's coming from, (but) I think it's hard for me, in writing him, that he is a heterosexual white man. I think one of the things fiction does so beautifully is allow us to have empathy with, and to root for, the underdog. As an author, it's much easier for me to write about women, queer people, people of different races who are marginalized or oppressed in some way, and I had to figure out how to make Tom sympathetic.

I give him an overthinker's brain, and I put him in this difficult situation, and I burden him with this dark progression he needs all in an attempt to figure out what can bind me, as a woman, to him, as a male character. It was a weird but fun challenge to give myself. Near the end of writing him, I fell in love with him the way I can with all of my characters. He is a more passive character than the other three, which maybe speaks to our modern condition. He's allowed to kind of drift along without really taking a stand for anything, perhaps until it's too late, which is maybe a position a lot of us find ourselves in.

Something that really struck me is the theme of "layers," both literal and metaphorical, that covers Rome, layers of grime and history. It's the fishing hook that's the central theme throughout these narratives, but going beyond that, these mirroring struggles interlock these characters that are thousands of years apart. Have you ever thought about your book in terms of layers?

Absolutely, when I first traveled to Rome several years ago, one of the strange things I noticed was the "layered" quality that you picked up on. It's a city that doesn't throw its history in the trash bin; it keeps it and builds on top of it and on top of it so that when you're walking around, you see a 21st-century hair salon in a Renaissance Palace that's build on top of an ancient Roman temple, and it's all visible. It's different from in the South where we have some visible architecture, but you don't see a lot, and it can vary.

That was very exciting for me, and it reinforced my own philosophy about history, which is that it's all circular and we're all smooshed together. All of these things that happened to people in the past are still, in some ways, happening to us now. So, I love the idea of setting a novel in a place that embraces those layers.

Was there a process to writing "The Everlasting"? Trying to understand how you decided to start the novel with Tom and work backward threw me for a loop.

The structure was definitely the hardest part. I initially wrote this book as four separate novellas and then realized that I didn't want them to be so distinct from one another. ... I also knew that I didn't want to move chronologically forward in a way that would allow people to say, "Okay, that was the past, and this was slightly more recently, and this is the present day. We're all fine and only moving upward in terms of civilization and evolution."

I wanted to somehow convey the sense that what happened in the seventh century is very relevant. Maybe this ninth-century monk is a little bit more civilized than this 16th-century woman. It's all relative, basically. So I had this borderline mapped out on how this could all work. Fortunately, I had some friends who read the manuscript and listed my various options to help me think about what would make the most sense to readers but also achieve the structural mission that I had.

I love your constantly shifting stances on religion, sex, sexuality, gender, crumbling marriages and pregnancy, to name a few highlights. Is there a message that you want to shine above the rest or anything that you're especially proud about in this novel?

I think at its very core, I was trying to figure out what it means to be good, specifically in the context of love. I think I was feeling confused when I was writing it about the ways in which love makes us do bad things so often and yet how it's a thing that turns us into our better selves.

What does it look like when you fall in love? How can love make you better? How can it make you perform these sacrifices that are extraordinary? Also, how can it mislead you and take you by the nose down this very dark path? The novel speaks on the love of God, the love of family, romantic love with a person and the love of an unborn child.

I think my favorite voice has to be your Satan character. Can you explain whether there was a process of writing him? Did you finish the manuscript and then add in the Satan monologues? What role do you see him playing throughout the novel?

He came in very early on in the process. When a character I was writing asked a rhetorical question and I didn't want to leave the question hanging in the air—but I didn't know, as the author, how to answer it—a very sarcastic voice came in and answered it for me, and I was like, "Oh, that's definitely the devil."

Then it became this kind of combo where anytime a character would ask a rhetorical question, he would answer it. He started out as more of a malign presence trying to lead them astray to cause mischief in their lives, but through the writing process, I realized that he was a character, too, who had had his heart broken. God had casted him out of heaven. Here was the deity who had chosen to forgive literally every single person on Earth but not Satan, like the ex-boyfriend or whatever. I thought, "Oh, that makes him so human, and he's so able to relate to these people who are going through similar things."

Katy Simpson Smith will be signing copies of "The Everlasting" on Tuesday, March 31, at Lemuria Bookstore (4465 Interstate 55, Suite 202) beginning at 5 p.m. For more information, call 601-366-7619 or visit lemuriabooks.com. The novel is available for purchase in physical, digital and audiobook versions at Amazon or harpercollins.com.