Mike Moore: When Life Gives You Headaches, Help Others 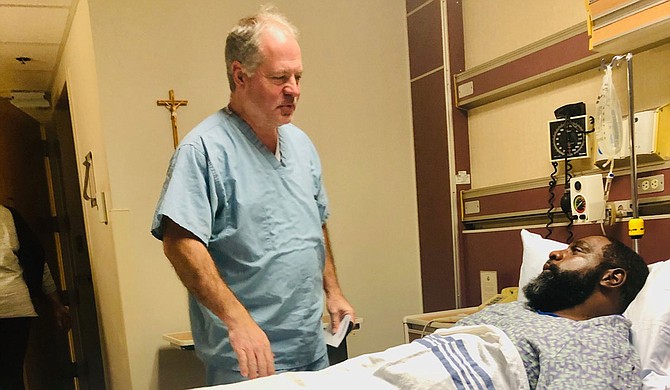 Sometimes a headache isn't just a headache. Yazoo City native Michael Moore learned this lesson firsthand in 2018 when he took ill with a bacterial infection and was taken to St. Dominic Hospital. Following severe headaches, elbow and knee surgery, loss of vision in his right eye and loss of balance, doctors diagnosed Moore with narcolepsy and benign positional vertigo. Shortly after an MRI, the doctors discovered Moore also suffered from type-1 chiari malformation and syringomyelia. The narcolepsy and vertigo were symptoms of those conditions.

Chiari malformation is a rare neurological disease where the bottom part of the brain, the cerebellum, drops down from the skull and presses on the spinal cord. Affecting about 1 in 1,000 people, the most common symptoms are severe migraines or headaches. Syringomyelia is a neurological disorder where a fluid-filled cyst, known as a syrinx, develops inside the spinal cord; Moore had a growing syrinx.

“I always said that if I came down with an illness that was rare, then I was going to become an activist for it and work to help others and raise awareness. The neurologists never had information (immediately available) on this. There’s no support group in Mississippi. I couldn’t believe this,” Moore says.

Moore had decompression surgery in November 2019—wherein his neurosurgeon, John Lancon from St. Dominic's, removed part of his skull to allot five centimeters of room for his brain—and is now moving at 35% of his normal activity.Research on chiari-based treatments is still underway, although certain medications as well as a healthy diet and exercise regimen can help relieve symptoms.

Since his diagnosis, Moore has become a golden ambassador for chiari with Diseasemaps, a service that gives online support to people who have questions about chiari. He has also been working with Conquer Chiari of America, the number-one chiari support group and research center in the world, to plan walks and fundraisers for chiari awareness. He is organizing a walk for September, with specifics to be announced in April.

Moore graduated from Yazoo City High School in 1988 and went on to Hinds Community College, where he earned his associate’s degree in applied science, and then enrolled in Jackson State University, where he studied industrial technology with a concentration in electronics engineering. He has worked with AT&T for more than 20 years, starting in 1997.

Presently, Moore is taking steps to further help Mississippians who may be suffering from chiari-related afflictions and syringomyelia by starting his own Jackson-based nonprofit foundation, which he plans to name Triple One Chiari, whose main goals are to distribute information around the state and to start support groups in Mississippi for people who have the conditions.

He also plans to lobby for preventative maintenance screening to be added to health care plans and to provide adult educational classes about the disease.

"I don't know what set me on fire. God spoke to me and just put this on my heart for me to try to make as many people aware of (chiari malformation) as possible," Moore says.

"I think (the nonprofit) will help Mississippi a lot. I just notice that when I go to my neurologist, the rooms are filled. I've had a lot of people tell me, 'I read your article. I'm really gonna think about this because I have headaches.' It's going to be a great, positive movement," Moore says.

In the future, Moore wants to see information about chiari and syringomyelia in the lobbies and waiting rooms of every hospital and neurological/neurosurgery department in the state, starting in Jackson.

“My main goal is to bring awareness. I plan on collecting more data and doing more research, and I plan on interviewing more chiari patients. I just want to make the chiari malformation database be accurate as possible, because it’s not accurate. I have so many people telling me about the headaches. For 98% of the people, headaches are the number one symptom,” Moore says.

Moore has been married to his wife, Martha, for nine years. The couple have four children between the two of them: Laporcha, Michaela, Destinee and Brendon.

Moore is working on a GoFundMe for Triple One Chiari. Donations for the nonprofit will open later this spring.