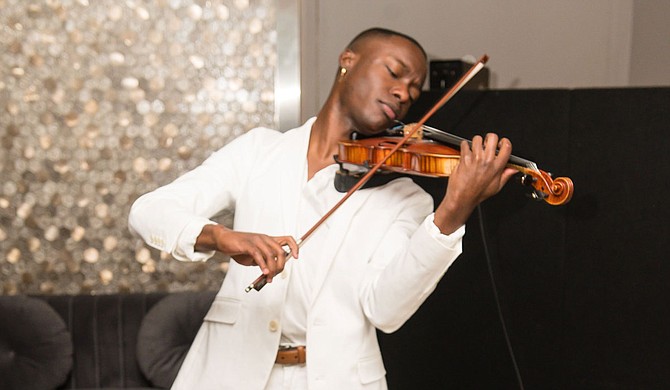 When the pandemic cancelled most of his scheduled events, violinist John Uzodinma II sought a way to stay connected to the public. He already had a thriving social-media presence where he released covers of gospel, R&B and hip-hop hits, so taking a page from DJs across the country, the 25-year-old decided to use the platforms to bring his music into people's homes.

"I decided to go on Facebook Live. I would basically give you a concert from home," he says. "People would Cash App or Venmo me as if I was there giving a live performance."

Joining his school's group string-instrument lessons at 8 years old piqued Uzodinma's interest in violin. A year later, he had progressed so far that his teacher suggested he study privately.

Uzodinma began performing at church with the Farish Street Baptist Church String Ensemble. Soon after, he was playing for weddings and other events. His notoriety grew, and soon he was traveling across the country performing for national events, including the 2013 Medgar Evers 50th Anniversary Celebration at the National Arlington Cemetery in Washington, D.C., and the Aspen Summer Music Festival and School in Colorado. He has competed both nationally and internationally, traveling to places such as British Columbia, Canada and Sydney—all opportunities that Uzodinma credits to his instrument.

"The violin has acted like a passport for me," he says. "I've been to a lot of places and met a lot of people because of it."

The Madison native gained international recognition after his performance at the opening ceremonies of the 2019 Mississippi House of Representatives legislative session. Several major news stations aired his rendition of "The Star-Spangled Banner," with one video gaining more than 6.5 million views.

Of his accolades, Uzodinma is most proud that he has served as concertmaster at both LSU and USM, as his professors told him that he is the first African American violin performance student to be concertmaster at their respective schools.

Uzodinma says that people have often told him throughout his musical journey that he was the "first" or the "only" African American to be achieving the accomplishments he had accumulated.

He hopes to change that.

"I want to inspire a young Black boy or girl to pick up a violin, or cello, violin or viola. I want them to know they can be successful with (string instruments)," he says. "I would love to start an orchestra program at an HBCU and recruit students to come to that college to study music."