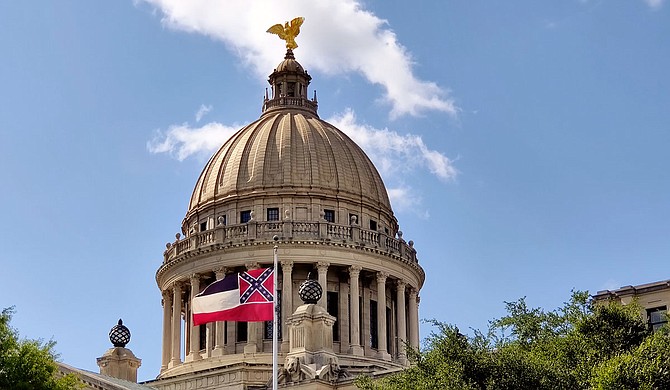 Joshua D. Dedmond and M. Endesha Juakali of Cooperation Jackson write that the Mississippi state flag “represents a time when most people of African descent were bound in chattel slavery and could be sold like cattle and bred like dogs.” Photo by Nick Judin 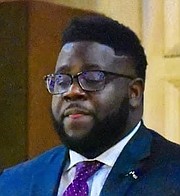 We are currently in a season of change; the winds of change are blowing away old ways of thinking and old symbols of white supremacy. In this political moment that is heightened with tension, people are giving deep and critical questioning to the established norms of the oppressive state. We have witnessed this in current uprisings in Minnesota, Kentucky, New York, California and internationally. This moment has driven a critical question: How do we the people combat the hegemonic white-supremacist machine that governs our society?

In this political moment, we must be clear that the nature of Mississippi is such that it’s the only place in the country where its major symbol of power and pride, the flag that flies over everything owned and controlled by the state, contains within it a ​state-sanctioned symbol of white supremacy and Black submission—the Confederate battle flag.

In this moment we must work to further debunk the myths and lies of “southern heritage.” The first and most obvious lie that is repeated constantly is that the Civil War was not about slavery. But the first reason that was given by those who were seceding stated clearly the reason in the official Mississippi Declaration of Secession:

“In the momentous step which our State has taken of dissolving its connection with the government of which we so long formed a part, it is but just that we should declare the prominent reasons which have induced our course.

“Our position is thoroughly identified with the institution of slavery--the greatest material interest of the world. Its labor supplies the product which constitutes by far the largest and most important portions of commerce of the earth. These products are peculiar to the climate verging on the tropical regions, and by an imperious law of nature, none but the black race can bear exposure to the tropical sun. These products have become necessities of the world, and a blow at slavery is a blow at commerce and civilization.

“That blow has been long aimed at the institution, and was at the point of reaching its consummation. There was no choice left us but submission to the mandates of abolition, or a dissolution of the Union, whose principles had been subverted to work out our ruin.

“That we do not overstate the dangers to our institution, a reference to a few facts will sufficiently prove.”

The declaration shows clearly that the people who fought and killed more than 360,000 Union soldiers and sought to destroy the United States as it was then constituted did so for one major reason: to preserve their right to own other human beings so that they could profit from their labor.

The current governor of Mississippi recently reiterated the major talking point white supremacists use to distract the population from the issue, revealing their intent to keep the state mired in the 19th century. His position is that the flag should be changed by a vote of the people of Mississippi and not legislators in Jackson.

But in 1894, legislators in Jackson created the current flag. If the process of legislators in the Capitol deciding on a flag is illegitimate, then the current flag is illegitimate. Furthermore, there is no legal requirement for a public vote to decide a change in the flag. The statement that the flag represents the history and heritage to southern whites is valid and true. But it represents history to the people of African descent in Mississippi as well.

The flag represents a time when most people of African descent were bound in chattel slavery and could be sold like cattle and bred like dogs. U.S. Supreme Court Chief Justice Roger B. Taney stated in the Dred Scott decision: “Blacks have no rights which the white man was bound to respect, and the negro might justly and lawfully (be) reduced to slavery for his own benefit.”

We’re speaking of a time when the killing of a Black person by a white person was not murder, and the sexual ravaging of Black women and men by white men was not rape. This is the social order that people who fought under that flag sought to maintain. Keeping that flag inside the state flag maintains the status quo in which almost half the citizens of the state and more than 80 percent of the people in the capital city must endure living under a flag that represents a battle that if it would have been won, they would still be considered property without human rights.

People of African descent in Mississippi cannot tolerate this flag any longer. It must come down now or be taken down ​“by any means necessary.” Any person who has any humanity must join this battle to remove the monstrosity that flies over the state of Mississippi​ immediately!

To the citizens of African descent that continue to live under a symbol that degrades them every time that it is raised, we repeat Black abolitionist and minister Henry Highland Garnett’s question from 1843: “Where is the blood of your fathers? Has it run out of your veins?”

It is the right time in our history to rid our sights of this abomination. Let’s seize the time!