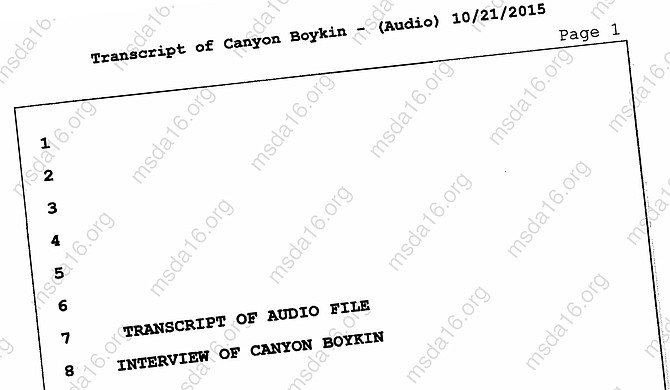 A Mississippi district attorney has released evidence files in the case of a white officer who fatally shot a black man during a 2015 traffic stop. Photo courtesy MSDA

COLUMBUS, Miss. (AP) — A Mississippi district attorney has released evidence files in the case of a white officer who fatally shot a black man during a 2015 traffic stop.

Fitch sent the files to Colom, who uploaded them to his website Saturday, news outlets reported. The files include police depositions and portions of the body camera footage.

Fitch dropped the manslaughter charge against Boykin, stating that evidence showed Boykin shot Ball in self-defense. The case was dropped “with prejudice” on May 28, meaning it cannot be revived.

Boykin was with his civilian fiancee, Alisa Stanford; his patrol partner, Johnny Max Branch; and Officer Yolanda Young on Oct. 16, 2015, when they tailed a car for several blocks because of a missing tag light.

Ball, 26, was a passenger in the other vehicle and ran after it was stopped, Boykin said. The officer said he fired his weapon while chasing Ball because Ball appeared to point a gun at him. A handgun was found near Ball’s body.

Boykin was fired after the shooting for several policy violations, including not activating his camera during the confrontation and inviting his then-fiancee to ride along without permission.

Colom transferred the case to the attorney general’s office in 2016.

He said he wasn't critical of Fitch's decision but “people deserved more than a two-paragraph press release.”

“That is why I really pushed to get the evidence, so everybody knows, as far as I am concerned, that I didn’t allow any secrets,” Colom said.

After reviewing the evidence, Colom said there was some things that struck him as surprising, including the fact that Ball and Boykin had previous encounters.

He said he hopes the released files help the public regain trust in the criminal justice system.

“I think it’s important that the truth comes out and there’s transparency,” he said. “In this climate that we are in, there’s not a lot of trust in the criminal justice system. People have to make their decision for themselves about the reason for the dismissal.”