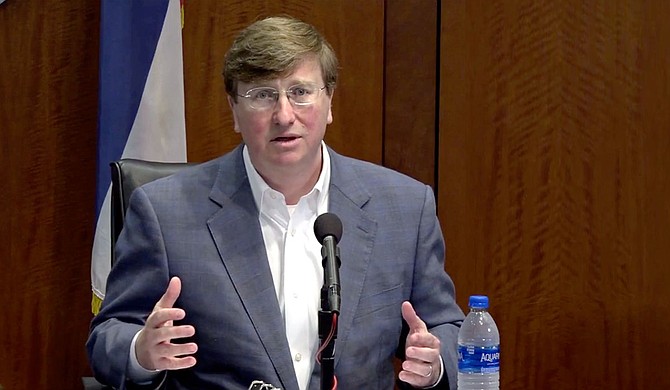 Mississippi Gov. Tate Reeves said Monday that the state still faces danger from the coronavirus pandemic, and people should not harass or make fun of those who follow public health recommendations to wear masks in public. Photo courtesy State of Mississippi

JACKSON, Miss. (AP) — Mississippi Gov. Tate Reeves said Monday that the state still faces danger from the coronavirus pandemic, and people should not harass or make fun of those who follow public health recommendations to wear masks in public.

During a news conference, a Columbus reporter asked about “mask shaming." Joey Barnes of WCBI-TV said he had his face covered while shopping at Walmart and a man looked him in the eye and coughed three short times.

“It's wrong,” Reeves said. “If people want to wear a mask into a Walmart or into a restaurant or into any other business — not only should they be allowed to do so; in many instances, they ought to be credited for doing so. ... Everyone out there that is choosing to wear a mask is actually doing something good for their fellow Mississippians."

Thousands of people in Jackson and hundreds more people in several other Mississippi cities took part in demonstrations Saturday to protest police violence against African Americans. Masks were prevalent among protesters.

Reeves said Monday that he supports the right to protest and he was pleased the Mississippi events were peaceful. But, he said he's concerned that protesters who stood close to each other could unintentionally spread the virus later to people who are medically vulnerable.

“My concern is, what if those individuals went and protested on Saturday and then went and had Sunday lunch with their grandmom,” Reeves said.

Reeves said he and the state health officer, Dr. Thomas Dobbs, spent Monday morning in phone calls with mayors and county supervisors urging them to be vigilant about trying to slow the spread of the highly contagious virus.

The Health Department said Monday that Mississippi — with a population of about 3 million — has had at least 17,768 cases and 837 deaths from the coronavirus as of Sunday evening. That was an increase of 498 cases and 20 deaths from the numbers reported a day earlier; the latest count included nine deaths that occurred between May 13 and June 1, with information from death certificates arriving later.

The department said at least 13,356 people in Mississippi are presumed to have recovered from COVID-19, based on when they tested positive.

The number of coronavirus infections is thought to be far higher because many people have not been tested, and studies suggest people can be infected without feeling sick. For most people, the coronavirus causes mild or moderate symptoms that clear up within weeks. For others, especially older adults and people with existing health problems, it can cause severe symptoms and be fatal.

The Health Department said Monday at least 2,065 cases of the virus have been confirmed in long-term care facilities such as nursing homes, with at least 435 virus-related deaths in those facilities.

The department said 217,229 coronavirus tests had been conducted in Mississippi as of Sunday; 9,140 of those were blood tests that detect whether a person has antibodies that usually show up after an infection is resolved.