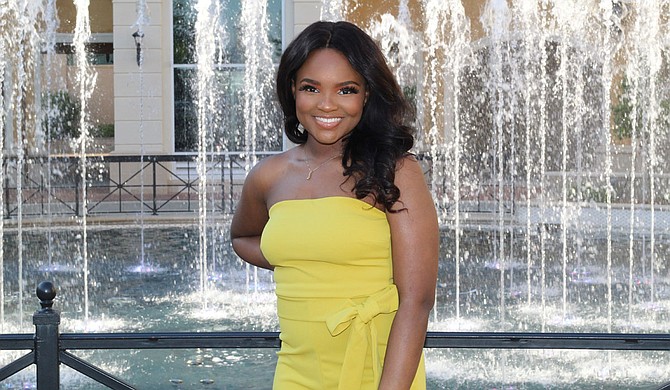 When many people reflect on their high school experiences, they remember the times as difficult ones. Try attending two high schools at the same time, like Mackenzie Williams did. A recent Murrah High School graduate and Murrah Hall of Fame inductee who graduated in the top 6% of her class, Williams spoke highly of her time in the Power APAC program, which she likened to an “honors program” that allows students to remain engaged with their artistic interests while completing their more traditional high school coursework.

During her time at Murrah and in the Power APAC program, Williams excelled, balancing the meaningful performances she delivered on the stage with her outstanding work in the classroom.

“School has always been important to me, but I wanted to make it a priority to do something I loved,” Williams said of her nine years on the stage, referring to her involvement in theater as the “best thing I could have done for myself.”

She recalled her group’s performance of “The Laramie Project,” the story of a young gay man who was brutally murdered. Williams was especially proud of her own role and performance in the show, as she overcame anxiety derived from a stutter to deliver a heartfelt performance.

The story’s depth and richness and the actors’ prowess led the group to perform the show at the local New Stage Theatre and again at last year’s International Thespian Festival in Lincoln, Neb., which Williams cited as “the best week of all.” Although Covid-19 cancelled in-person plans for this year’s International Thespian Festival, Williams plans to attend the event virtually, saying that it is “too important to miss.”

When asked what her dream role would be in future productions when she is again able to return to the stage, Williams said that she would love to play the lead in the Tony-Award winning “Once on This Island,” a play focused on the impact of colorism with a cast almost entirely comprised by people of color.

Although Williams laments never having had the opportunity to see the show performed live, she said that watching YouTube performances has helped her learn the music, lines and themes. “I would be able to connect with the character in a genuine way,” she said.

The Jackson native not only uses the stage to connect with audiences in a genuine way, she also enjoys expressing herself through writing. “Writing argumentative essays is the best way that I am able to articulate myself and my thoughts,” she said.

Williams did so with great success, writing an essay for her AP Language class entitled “When the Educator Becomes the Oppressor,” about themes presented in Paulo Freire’s “Pedagogy of the Oppressed.”

“There are repercussions when a classroom is not constructive; it’s bad for the society as a whole,” she says, identifying the central idea explored in the paper. Judges with Mississippi’s Scholastic Arts and Writing contest agreed, giving Williams the Silver Key award. The essay marked Williams’s first-ever submission to the contest, although she would go on to win the Gold Key later that same year.

In the future, Williams plans to attend Jackson State University to study speech pathology. “Since I struggled with a stutter for most of my childhood, how communicative disorders develop intrigues me,” she said.

The 18-year-old says that she is excited to stay in the Jackson area, believing that the opportunities that the local university offers are valuable and will allow her to foster already-existing connections in the area.

Williams added that she was not abandoning theater at the collegiate level, as she will be minoring in the field. “I can’t lose touch with that part of my life,” she smiles.