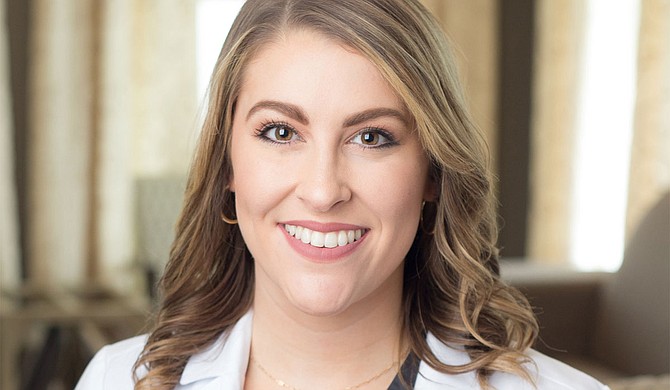 “Physician Assistants are new to Mississippi, so lots of people aren’t educated about us and what we can do,” Resser said of her continued rejections in her chosen field. “When I wanted to be in plastics and was told that wasn’t a realistic job for me, I never gave up. I didn’t care if I was told no.”

Long before the eventual “yes,” the Hattiesburg native began preparing herself to enter the field of plastic surgery, earning bachelor’s degrees in chemistry and biology from the University of Southern Mississippi in 2016, followed by a Master of Science in medicine from Mississippi College’s physician assistant program in 2019.

Resser cites her role in the empowerment of patients as the most important thing she learned during her constant stream of rotations. “Sometimes, if there’s one small thing that bothers someone and we correct it, we have changed their entire world. Their confidence goes through the roof,” Resser said of the cosmetic procedures she helps perform.

The Clinton resident was quick to point out that her work as a physician assistant is not limited to cosmetic procedures, as she is now employed at the Mississippi Center for Plastic Surgery in Ridgeland, working alongside Dr. David Steckler, Jr.

“I’m the first assist on every surgery. I close all incisions (for Steckler), and I also perform skin biopsies and skin lesion checks to see if anything is suspicious or cancerous,” Resser said, remarking that she had recently begun a one-day-per-week clinic in Vicksburg to provide such services for Warren County patients.

Although Resser enjoys those aspects of her profession, she noted that her favorite part of her job was working with breast cancer patients. Once patients receive bilateral mastectomies, plastic surgeons and their PA’s are charged with performing subsequent reconstructive surgeries.

“(Dr. Steckler and I) tag-team, but I see the patients a little more often to take care of them after their surgery,” Resser stated. “The most rewarding part of my job is helping these women feel feminine again. If women feel good about themselves, they display that and portray it to other women.”

Resser believes that her particular care for her female patients is aided by the fact that she herself is a woman. “It’s a male-dominated field, so it helps every single woman that I see to know that I’ll be on the other side of the table with him. It makes women of all ages feel better to know that they have a man’s and a woman’s opinion on their surgery.”

It was Resser’s love for her work that helped her and her husband Austin Resser, a manager at Cefco Electric, decide to remain in the area after she completed her studies at Mississippi College’s Clinton-based campus, although her parents, David and Deborah Hogan, still reside in Resser’s hometown of Hattiesburg, Miss.

“We plan to stay in this area. We love it here,” Resser affirmed.