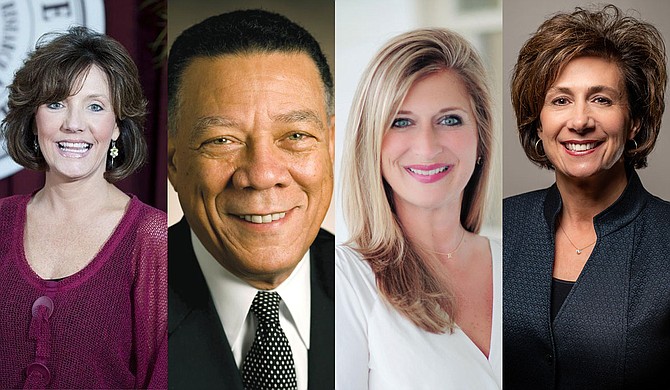 JACKSON, Miss. (AP) — A mayor, a former state Supreme Court justice and a community college president are among the people chosen to design a new Mississippi flag to replace one state officials recently retired because it included the Confederate battle emblem that's widely condemned as racist.

A nine-member commission has a mid-September deadline to create a new design that does not have the Confederate symbol but does have the phrase, “In God We Trust.”

A single flag design will be put on the Nov. 3 ballot. If voters reject it, the commission will draft a different design using the same guidelines, to be sent to voters later.

Mississippi legislators took a landmark vote in late June to retire a 126-year-old state flag that was the last in the U.S. to include the Confederate battle emblem. The change came amid national protests over racial injustice.

Gunn said Taylor, who is African American, played an important role in building support for changing the flag.

“His passion for this issue and his calm demeanor will add much to the commission’s process while representing the voice of a younger generation of Mississippians," Gunn said.

“Because of their character, and the diversity of their backgrounds and perspectives, I have confidence they will come to a conclusion which will be respectful of our past and reflect a bright future,” Hosemann said in a news release.

Anderson was Mississippi’s first African American state Mississippi Supreme Court justice, serving from 1985 to 1991. He is president of the Board of Trustees for the Mississippi Department of Archives and History.

Varner practices family and business law in Vicksburg. He is the past president of the Friends of Vicksburg National Military Park and Vicksburg Convention and Visitors Bureau.

Bevis previously taught in the Bay-Waveland and Hancock County School Districts. When Hosemann was secretary of state, he named Bevis to work in marketing for the secretary of state’s office. Bevis is national president of the Mississippi State Alumni Association.

The state Department of Archives and History has asked the public to submit flag ideas that have simple designs and meaningful symbols. Those will be shared with the commission.

Read more about the long road to changing the Mississippi State Flag here.