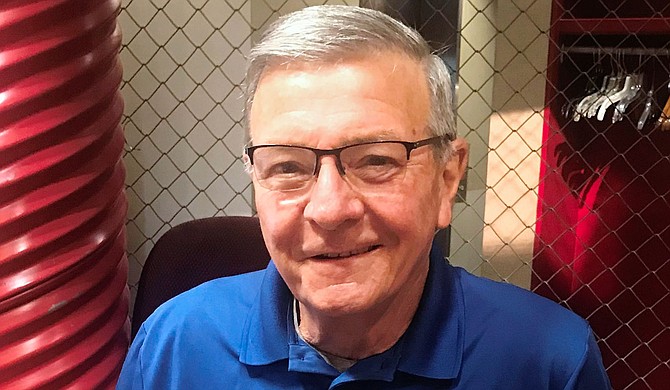 If you walk through the doors at the Mississippi Sports Hall of Fame on Mondays, Mike Andrews, a 12-year veteran volunteer, will be there to welcome you.

Andrews first began work at the museum after being recommended for the job by a friend from the YMCA, Larry Adams, who thought that the retired Andrews would be a perfect fit for the position.

The job fit like a glove, Andrews said. “When people come in who have never been to the museum, I love showing them how the flow of the museum works. I ask them, ‘Do you like basketball? Do you like football? Do you like the Olympics?’ And then I’m able to show them where to go from there.”

Andrews’ favorite aspect of the museum’s offerings come as soon as visitors enter. “When you first go in,” Andrews recalled, “you sit through a 10-12 minute film that gives you a taste of what you’ll see in the Hall of Fame.”

The video is particularly special to Andrews because he knows many of the sports stars who feature in it, including some he grew up watching in the fifties and sixties.

His experience with the athletes is not limited to those he saw on the small screen, however. Andrews graduated from the same Columbus, Miss. high school as football player Billy Ray Adams, who would go on from his tenure at Ole Miss to NFL careers with the San Francisco 49ers and the Houston Oilers.

Adams was three years older than Andrews, who double-lettered in football and track. Andrews would continue his football career at the Marion Military Institute. “I tore up my ankle playing football there,” he remembered. “It was the best thing that ever happened to me. I wasn’t really good enough to play junior college ball, and my injury helped me realize that.”

Andrews did not remain in the shoe-selling business, transferring instead to mattress sales, where he spent decades training salesmen, which he cited as the most rewarding part of his job. He summed up his sales philosophy in a sentence, saying, “It’s not about a mattress. It’s about the sleep.”

Andrews’ grandchildren fondly refer to him and his wife as “Big Mike and Grandsuzi,” and he noted that while he’s been a sports fan all his life -- especially of the Mississippi State bulldogs -- he now gets the most pleasure from watching his children and grandchildren play sports.

Of their time on the field, Andrews observed, “My children have stumped their toes at times. It’s my job to help them.”

To help them overcome their problems, Andrews passed on advice that his father gave to him as a young man: “to pluck a thistle where a rose might grow.”

It’s a father’s business, Andrews believes, to help his children with the thistles when they arrive and to celebrate the roses when they grow.

“I’m just a southern daddy who does what he’s supposed to do,” Andrews concluded.