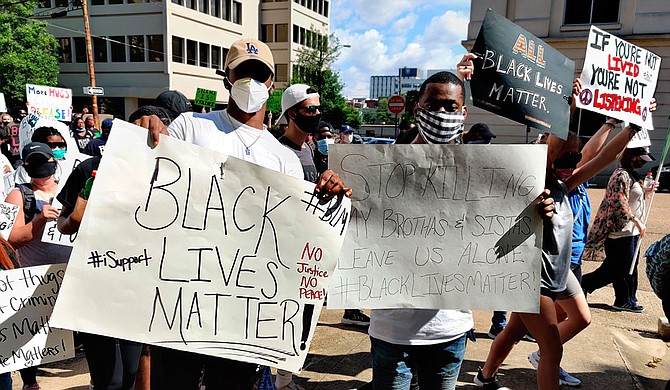 You're “being messy, loud, and wrong. per usual. ... if you want to have dialogue, use it,” tweeted Maisie Brown, an 18-year-old from Jackson who helped organize a protest that drew thousands to the capital in June after the killing of George Floyd. “this isn’t the time to be divisive & demonize people who got out to change. we were masked! up! where’s yours?” Photo by Nick Judin

JACKSON, Miss. (AP) — A Mississippi Senate leader and a protest organizer are speaking out against Republican Gov. Tate Reeves's tweet Sunday that said the “liberal media” is ignoring new coronavirus cases that could have been caused by protests and blaming a surge of holiday barbecue parties.

You're “being messy, loud, and wrong. per usual. ... if you want to have dialogue, use it,” tweeted Maisie Brown, an 18-year-old from Jackson who helped organize a protest that drew thousands to the capital in June after the killing of George Floyd. “this isn’t the time to be divisive & demonize people who got out to change. we were masked! up! where’s yours?”

Mississippi Senate Minority Leader Derrick T. Simmons of Greenville said he doesn't think the governor or anyone else can “for certain blame the increased number of COVID-19 cases on protests around the nation or in Mississippi.” New cases can also be caused by people returning to work, the reopening of the economy and increased testing, Simmons wrote in a statement.

“I trust media professionals with their assessments since they are trained to be factual and won’t dare to condemn them for doing the tough job and informing the American people with facts," Simmons said.

Reeves's tweet came a few days after a news conference where State Health Officer Dr. Thomas Dobbs said there was no evidence of any outbreaks in Mississippi caused by protests. No states where there have been major protests have reported an uptick in cases caused by protests.

“Liberal media is trying to claim the increase of Coronavirus was just caused by family BBQ’s on Memorial Day,” Reeves tweeted on Sunday. "They completely ignore the fact that our uptick (and other states) began within days of massive protests all over—which they celebrated."

During a Facebook Live video Monday afternoon, Reeves expanded on that thought, saying it's “not smart” for families to host large barbecue parties. However, Reeves said reporting on the protests, especially by national cable news outlets, had bothered him for weeks.

“There are those in the national media that would have you believe that had absolutely no impact on the rising number of cases,” he said of protests against racial injustice around the country. “I would submit to you that common sense says otherwise. I think as we look back, it will be proven that that is the case.”

Mississippi, mirroring other Southern states, has seen in recent weeks its highest number of daily confirmed cases since the start of the pandemic. The state health department reported 1,092 new cases of the virus on June 25, and 914 new cases reported July 3. On Monday, the state was reporting 357 new confirmed cases of the virus and three new deaths.

Mississippi has a population of about 3 million. The state has had at least 31,257 total cases and 1,114 deaths from the coronavirus as of Sunday evening.

Dobbs said cases are increasing most rapidly among young people in their 20s. He cited outbreaks caused by fraternity parties in Oxford, near the University of Mississippi.

However, Dobbs has pleaded with people to avoid large social gatherings as a whole.