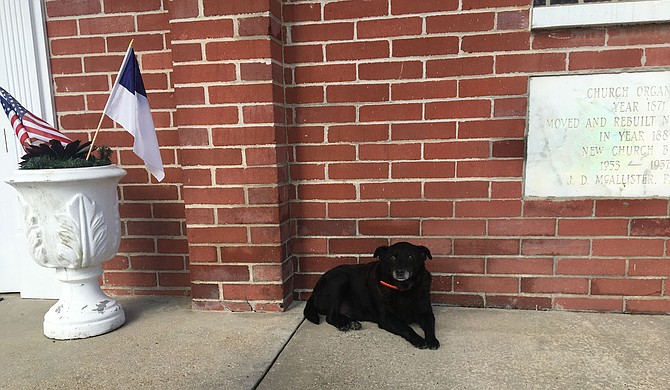 MAGNOLIA, Miss. (AP) — Terry’s Creek Baptist Church has many faithful members, no doubt — but perhaps none more so than a four-legged one named Spike.

Spike is a big, black, gentle Lab mix owned by member and nearby resident Tom Gunther.

“Sunday morning he’ll come running down the road and stay down here and meet every person that drives up, and people will pet him and he goes around to every car and he’ll wait at that front door,” said the Rev. Laverne Summerlin, pastor.

“When I open the door he’s right there to greet everybody. He’ll come in on the front foyer mat and sit right there. He greets people and they talk to him.

“Every service he stays at that front door until we dismiss, and when we dismiss he goes around to every person.”

Spike’s origins are uncertain before he arrived at Terry’s Creek.

“He’s a stray,” Gunther said. “When he first came here, somebody must have put him out. He’d been shot. He’s got birdshot in his face and chest.”

That was 10 or 12 years ago. After Spike showed up at Gunther’s house, Gunther asked around for an owner. Unable to find one, he took the dog in.

“From day one he came to church,” Gunther said.

In most cases that might not be a good thing. The last thing Gunther wanted was a dog that pestered people at church. But one day a member laid down the law.

“Joe DeBlanc said, ‘That dog ain’t bothering nobody. Let him be,’ ” Gunther recalled.

Spike would remember that gesture of kindness.

“He’s just friendly,” Gunther said. “The deacons were meeting out there and he just came up to each one of them and let them pet him.”

Eventually Spike gained official status with a “security” card attached to his collar.

“If anybody comes in the church — I think it’s a real security thing. He’ll come down and check on you,” Gunther said.

Spike attends funerals at the church, too. Gunther recalls the time a busload of folks arrived for a funeral.

“He ran straight for that bus. I looked and every one one of them had to pet him. I don’t even know who those people were,” Gunther said.

“At a regular funeral he’ll be there in the cemetery.”

“I was up in there on the computer about 2 o’clock in the morning,” Gunther remembered. “He left — I said, ‘Where is he going?’ — and came down here and stayed till 7 o’clock that night. And that was the day Joe passed.”

Though Spike hasn’t been ordained (so far as anyone knows), he observes the pastoral code of confidentiality.

“People say he’ll keep secrets for you,” Gunther said. “He knows a lot of secrets.”

While Spike lives at Gunther’s house, every morning he walks to the home of another neighbor and church member, Catherine Brown. From her house he has a straight trot to the church in case someone arrives.

But he knows when to go anyway, as he proved when the church temporarily shut down for the coronavirus.

“What amazes me most is that Sunday night when we weren’t having church he came down here at church time and lay here till church would have been over,” Mrs. Brown said.

“Now how did he know what time church met on Sunday night?”