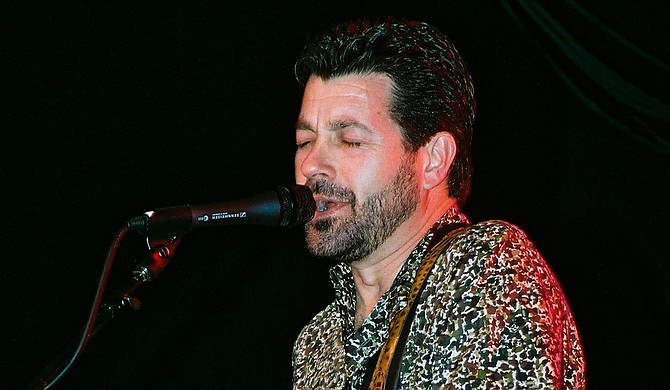 How does a Cajun from Little Caillou, Louisiana get the blues? Tab Benoit lets loose a throaty guffaw when asked this question, fully appreciating the incongruity of who he is and how he got to where he is now—one of the premier guitarists in any musical genre.

"I've always gravitated towards that sort of music—it probably started with Ray Charles. It was music that stopped and made me listen. I was probably 3 or 4 years old," Benoit recalls. "My dad was a big Ray Charles fan. When he'd play on the Johnny Carson Show we'd have to stay up and watch. Pre-internet days it was kind of whatever your parents were listening to—Aretha Franklin, James Brown—and big horn bands like Tower of Power, Chicago and Blood, Sweat & Tears."

Born in 1967, Tab Benoit grew up in the oil and fishing town of Houma, La. This is Amos Moses country and—though not quite 45 minutes southeast of Thibodaux—it is as Cajun as it gets. That a son of the bayou would somehow emerge from the deep culture of the Cajun two-step waltz to become one of the preeminent blues guitar players on the planet is a kind of musical cognitive dissonance. Guitar World magazine recently rated Benoit one of the 30 greatest blues guitar players in the world today.

But it's not as big a leap from Cajun to blues music as one might imagine, according to Benoit. "Cajun music has some of the saddest songs in the world. The lyrical content—there is blues in Cajun music. You listen to a North Mississippi boogie, and you listen to the two-step and the Zydeco stuff, the grooves are very similar. A lot of it is one chord or two chord moves. We were listening to each other across the river. I'm sure of it," Benoit says.

Although Benoit first played the drums as a youth, when the church fairs he played at refused to allow him to play his drums loudly, he switched to the guitar. But it was a different strain of music that soon caught Benoit's ear after he crossed over to the six-string. B.B. King, Freddie King and John Lee Hooker were the players Benoit studied and strove to emulate, emphasizing clean phrasing, an economy of notes, and scorching licks burning with homegrown Cajun passion. Unlike millions of middle-class white kids in America who found the blues through the back door provided by bands like the Rolling Stones and Led Zeppelin, Benoit started out with the masters. "I heard the Stones doing 'Little Red Rooster,' and I'm thinking, "No, no—that's not how Howlin' Wolf would do it."

Becoming a blues man, initially, was not a part of Benoit's master plan. "My parents had spent money on my education so that I could become a pilot," Benoit says. "I wanted to become an airline pilot, and I was getting as many hours under my belt as I could. I just played on the weekends to start with, but people kept asking me to play and giving me gigs, so I decided to go with it." When his partner crashed the airplane they co-owned, Benoit set aside his airborne aspirations to focus on his exploding musical career.

A Tab Benoit concert is almost a tribal experience, characterized by the interaction between Benoit and his passionate fans, and the singular absence of elaborate staging or electronic props. In concert, Benoit uses only his guitar, a cord and his amplifier. "I don't use any pedal boards or nothing—it all comes out of my fingers." Benoit seldom uses a set list. "I usually play what the audience requests, or whatever we feel like playing at the moment. It's all pretty spontaneous."

Now the owner of his own label, Whiskey Bayou Records, Benoit has taken advantage of the opportunity to work with bands in the kind of organic recording environment he loves. "Most of what you hear on one of our records is done in one or two takes. We don't go through editing out "bad" notes—those notes are what give the music emotion and passion. I've got a red button—when it's on, we play. When it's off, we done!"

Benoit is making his way to Jackson on Saturday, Feb. 8, to perform at Martin's Downtown (214 State St.). Tickets are $25 and can be found on Eventbrite. For more information on the blues guitarist, visit tabbenoit.com. To learn more about Whiskey Bayou Records, see whiskeybayourecords.com.