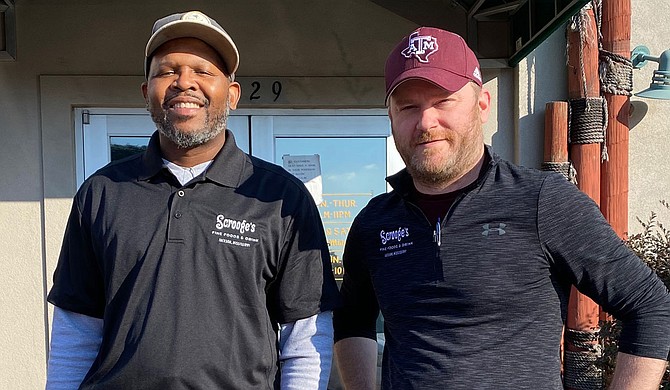 For the last six years, Chris Jefferson (left) and Chris Carter (right) have owned and operated Scrooge’s, which will be open on Christmas Day. Photo courtesy Scrooge's

When the previous owner sought to sell Scrooge's Fine Foods and Drink, she didn't have to look far. Chris Jefferson and Chris Carter, who both worked at Scrooge's, were more than willing to take over the restaurant. The pair understood that the pub had its own unique atmosphere paired with food and service embedded in southern hospitality.

"It was a good situation for both of us because we had worked together for a long time and we both had the same  vision for the restaurant," Carter says. "We knew what Scrooge's was, and we wanted it to continue to be that."

Jefferson had been with the restaurant nearly 20 years and Carter nearly nine years when they became co-owners, and the two have now owned and managed the local favorite for six years.

The menu contains what Jefferson refers to as "a little bit of everything." Patrons can sample pub favorites such as loaded nachos, loaded fries, cheese sticks and an assortment of wing flavors while enjoying the full bar. There are also southern classics like steak, chicken and seafood, as well as a variety of po-boys, sandwiches and soups.

Daily blue plates—consisting of a main entree, choice of two sides and a bread—are available for those stopping by for lunch. At dinner, nightly specials feature signature appetizers, entrees and soups. All can be enjoyed inside or on the patio, which is available year-round.

The most well-known item on the menu is the signature Scrooge burger, a hearty sandwich loaded with cheese, bacon, sauteed onions, mushroom gravy, chili, lettuce and tomato. "It's pretty popular," Carter says. "The Scrooge burger is definitely something to behold."

COVID-19 has slowed business in the past few months, but the pair are gearing up for what they believe will be a busy holiday season. The restaurant will also be open on Christmas Day.

"(We will offer) a limited menu, but it's always good to give people a place to go on Christmas night," Carter says.

That sentiment of community has remained the heartbeat of the business Carter and Jefferson have continued.

"Whether they are traveling through and just stopping in or whether they live in the neighborhood, (Scrooge's) is a social network with people of different walks of life and different communities," Carter says. "That is the experience that we want. We want to be that neighborhood restaurant or bar."