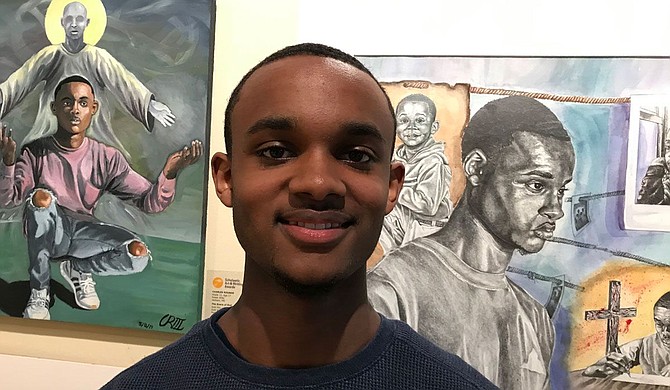 Murrah High School senior Charles Rounds stands with some of his artworks at a recent exhibition held at the Mississippi Museum of Art. Photo courtesy Sherry Lucas

"It was unexpected," Rounds, 18, says, chuckling as his teachers Renna Moore and Elise Payne tease him about the win.

Rounds has been drawing since the second grade. In self-portraits and drawings of friends, he conveys a range of emotions, from his thoughtful countenance in "Serenity," with a peaceful landscape in the background, to the frightened uncertainty in his pen-and-ink "When You See the Lights," where he stares straight ahead and grips the steering wheel as a police officer peers into the car. "Overcoming the Past, Embracing the Present, and Building My Future" reckons with his father's early departure and their reconciliation, Rounds' current focus with art and his dreams of becoming an architect.

Charles Rounds’ “Overcoming the Past, Embracing the Present, and Building My Future.” Photo courtesy Charles Rounds

His artworks rarely start with a detailed plan, Rounds says. "I'm one of those people that has to start on the artwork first, and then as I'm doing the artwork all these ideas come to me, and I ask God. ... He's pretty much leading me when I'm doing anything." His oil painting "The Grace of God" speaks directly to that faith, with a haloed spiritual presence, arms outstretched, behind him, which depicts "the idea that there's always someone there beside me, even if I don't realize it," he says.

Rounds uses his art as a means of motivating himself and building confidence, as well as a way to help others.

"I asked God to use my hands as a manifestation of his glory. ... Now, my aim has just been to provide inspiration to all types of people," he says.

His mother, Tonia Rounds, inspired his architectural goals. In the field, Rounds says he wants to design houses and "anything that would benefit the community (in) all different endeavors." He has been sketching buildings and making models at home since the pandemic forced school closures.

Rounds' works were recently part of the "2020 Scholastic Art Awards--Mississippi Regional Competition" exhibition at the Mississippi Museum of Art, before the museum temporarily closed its galleries due to COVID-19 concerns.

Rounds is still mulling his college plans, with Mississippi State University and School of the Art Institute of Chicago among the possibilities.

UPDATE: In May, Charles Rounds won the grand prize—and $6,000—in the international ArtEffect Project Competition for his mixed media artwork, "Saved by Science," which explores the inventive and courageous efforts of Dr. Eugene Lazowski, a Polish doctor during WWII who risked his life to save thousands of Jews.