Keep on Kicking in Jackson 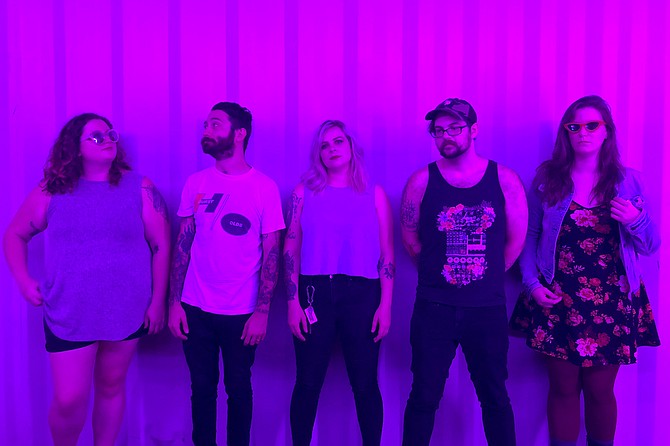 Two years ago, J.D. Burns and Bobbie Flanders were struggling to find a lineup for a band that would work. The original Kicking began with four members, but two of them left the band early on.

At the same time, musicians Sarah Shephard, Lacey Ellinwood and Henry Atherton were working on their own project, Atherton says, but kept trying to find the right people to turn their efforts into an organized, productive band. The two groups connected, and soon afterward Shephard, Ellinwood and Atherton joined Kicking. Since then, the band has kicked off its career with a full-length album recorded at Crown Studios and that is set to release in October. The now five-member band is comprised of Burns and Shephard as guitarists, Ellinwood as bassist, Atherton as drummer and Flanders as vocalist.

The members of Kicking are excited that this configuration of musicians is able to just play together, each "coming up with our own stuff," Flanders says, "until it eventually builds up part by part into a song."

The grunge band finds its influences from bands such as The Smashing Pumpkins and My Bloody Valentine, but it also contains elements of shoegaze and pop. By tuning down their guitars and adding other effects, though, the group shies away from traditional pop.

"We've been living in these genres because if our music was in a major key it would be pop music," Burns says. "Our writing style is like pop music, but we like to change up the key to give it that edge."

Over the band's years of playing together, they have found a spot in the city's music community.

"The devotion of the rock community in Jackson is incredible," Atherton says. "A lot of these college bars are politics by day, rock 'n' roll by night."

Although the band started its career performing locally, it has set its sights on the rest of Mississippi, touring the state constantly and continuing to create and release music.

In the run-up to the release of the album, "Modern Witch," the band will be performing Sept. 20 in Hattiesburg with local band Pleather. The work doesn't stop with performances, though.

"Part of the band from the get-go was continuously writing new music," Burns says. "Sharks keep swimming when they sleep, or else they die, and we like to think of ourselves like that."

In keeping with that idea, the band has recorded one demo, three EPs and a full-length album in about two years. The demo was recorded by Gary Lick at the Village Ruse, a recording studio in Vicksburg, Miss. The first EP, a live studio album, was recorded in Greenville, Miss., at Carbon Studios and released in October 2017. "Us Against," which came out on Nov. 8, 2017, was recorded by Kent Bruce at Malaco Records. About a month later, Kicking released a self-titled album recorded by the band's very own drummer Henry Atherton.

The band will release "Modern Witch" album in early October. For more information on Kicking, find the band on Facebook.