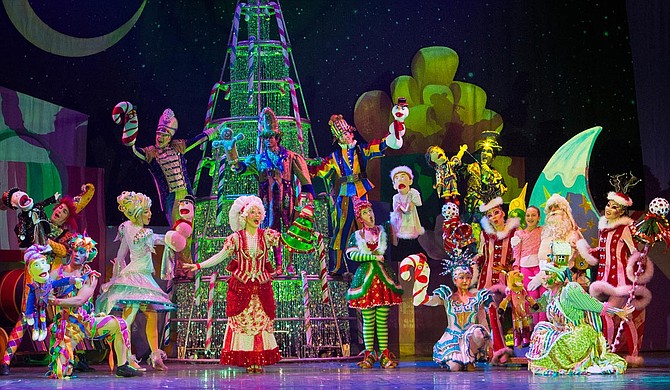 "Cirque Dreams Holidaze," a multimillion-dollar circus-like show that centers around the sense of wonder surrounding the holiday season, is coming to Thalia Mara Hall on Dec. 9. Director Neil Goldberg has selected 20 acts from around the world for this two-hour, two-act show.

"There's never a shortage of talent because our planet is our landscape. Every year there's new talent, new music; there are always new costumes," Goldberg says. "The costumes are worth the price of admission just by themselves. There are over 300 costumes in the show."

The centerpiece of the show is a 24-foot-tall, steel-framed Christmas tree. When the curtain comes up, performers are all dangling off the tree, wearing intrinsic costumes, all made by the Cirque Productions studio in Florida. One by one, each of the performers comes down to center stage and performs, culminating in a fantastical show that encapsulates the tone of the holidays.

"You can hear the gasp of the audience when the curtain comes up because it's unexpected. People think that the curtain's going to come up. and they're going to see a tent and a swinging trapeze. We try to achieve the unexpected," Goldberg says.

Goldberg notes that one of his top priorities in creating a holiday show was to make something that is not only enjoyable, but also affordable for families to have a wonderful experience.

"I love everything about the holiday season. I love the lights, the smiles on peoples' faces just because they see something that's magical," Goldberg says. "That was really my inspiration for creating the show and here we are, going into our 12th season."

The last time a Cirque Productions show came through Mississippi was in 2014. Goldberg emphasized the importance of making a show that can travel to hometown theaters all over the country.

"I grew up in a small town, and even though I was in New York, I was on the south shore. Not everyone can afford to buy a ticket to a Broadway show or fly to New York or go to Las Vegas. One of the sights that I set on was to be able to bring this talent and these types of shows to theaters all across the country. And that's why we're going to 60 different cities," Goldberg says.

Goldberg says he hopes that "Cirque Dreams Holidaze" will leave people ready to get into the holiday spirit. The show covers all areas of the holidays including Thanksgiving, Hanukkah, Christmas and New Year's.

"I hope that after people see the show on Monday, Dec. 9, that on Tuesday, Dec. 10, as a result of the show, they're compelled to go buy a gift. Set up their Christmas tree. Decorate the house. Just get in the spirit of celebration and festivity," Goldberg says.

Neil Goldberg was born and raised in New York, and he first got involved in Broadway and performing when he was 8 years old. He started Cirque Productions in 1993 with two other people.

Now, "Cirque Dreams Holidaze" is playing in 60 different cities in shows put on by six different companies across the country in its 12th season.