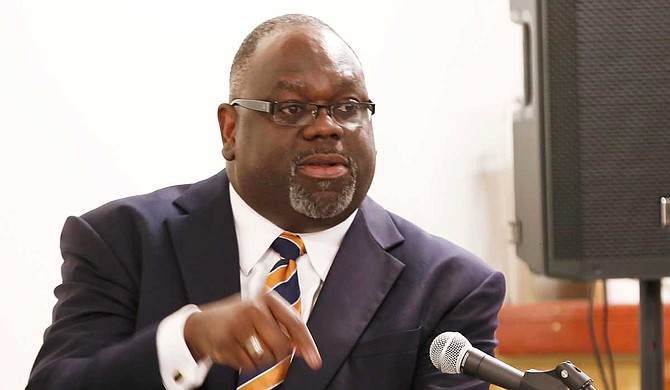 U.S. District Judge Carlton Reeves is hearing testimony without a jury in the case. A decision is unlikely before late this year. Photo by Imani Khayyam.

JACKSON, Miss. (AP) — A county sheriff says he holds mentally ill people in jail because a community mental health center can't respond in time. A woman says her cousin would like to live closer to his hometown in the Mississippi Delta but hasn't been able to find a place. A father says his daughter has spent 12 years in mental hospitals because the state didn't create community housing that could accommodate until last year.

Those are among witnesses who testified this week as part of the federal government's lawsuit arguing Mississippi violates the Americans with Disabilities Act by relying too much on state mental hospitals, while providing insufficient and uneven community services. U.S. District Judge Carlton Reeves is hearing testimony without a jury in the case. A decision is unlikely before late this year.

The state argues that it's not breaking the law and that the federal government is seeking overly extensive and expensive changes. The state also argues mental hospitals provide a valuable role.

A patient's father and a cousin of another patient testified Tuesday, identified only by initials, to protect patients' privacy.

The father said his daughter has what he called a borderline personality disorder and says she can be difficult to deal with. The Moss Point resident and former police officer testified that she has been in state hospitals for 12 of the last 24 years, including nearly five years on the last stay.

He said his daughter was "miserable" in the hospital and "certainly didn't want to be there." However, he said the state couldn't find a place providing the level of supervision she needed until she moved to a community transition home in Mendenhall in September.

"They had to create a place," he said.

State lawyer James Shelson asked about lawsuits and complaints the father has filed, and about an email that HB sent after his daughter was hit by a car and needed double knee replacement surgery. The email said, "The truth is, the state hospital is the place she would need to be. No private facility can deal with her."

The father said his statement was based on options available at the time.

Another witness said her cousin lives in Jackson, but has said that he'd like to be close to his relatives in the Mississippi Delta.

The cousin has disorganized schizophrenia, the witness testified. She said he's been hospitalized six times.

She said when her cousin was hospitalized, he wrote a letter to his mother saying he wanted to be closer to home "because life ain't promised to no one."

"It's heartbreaking," the witness said of the letter. "There is a family member who is communicating with his mother and saying 'I don't know when I will see you again.'"

Adams County Sheriff Travis Patten testified Wednesday that his jail often holds people who are mentally ill, even if not charged with a crime. He said a McComb-based community mental health center can't arrive in time to help.

The Clarion Ledger reports Patten said his community needs "a crisis team that actually responds" instead of having to train deputies to handle people who are mentally ill.

The jail added padding to floors and walls in two holding cells. In photos, Patten pointed out the drain in the middle of the cell. A person with mental illness chewed the padding around it.

"It's pure terror," Patten said of how mentally ill people react to jail. "I feel like they don't need to be in my jail or anyone else's jail."