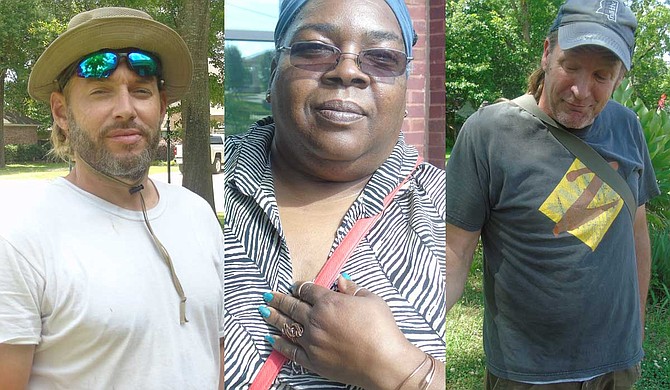 Gabe Porter (left) is the manager of True Local Market and owner of A Little Time to Grow. Liz Smith (center) of Inspired Dreamz poses with jewelry she made. Brian Newman (right) hopes to one day open a collective art studio where he can work on his passion: pottery. Photo by Ryan Oehrli

At first, Gabe Porter only wanted to sell his produce somewhere new and with air conditioning. It was spring 2018, and Rainbow Grocery was going bankrupt. Porter told the owners he was looking for a new venue for his small farm, A Little Time To Grow.

"How about I set up here in the breezeway?" he asked Christy Littlefield and other members of the business' board.

"We'll do this thing where it's 'meet the farmer.' I'll try to bring you more traffic, and you guys give me an inside, air-conditioned vendor."

Porter soon set up shop in the lobby outside the store space every Wednesday. Although he did not pay a vendor's fee,  Porter regularly bought lunch from Rainbow when he came in to sell.

"It was working out pretty well," said Littlefield, who will be Rainbow's assistant manager when the store reopens at Northpark Mall later this summer. "We were getting a little foot traffic there in Fondren."

When Rainbow closed in summer 2018, it let Porter start a second project, something to keep the space alive and sate longtime customers before the building was cleared: a solely local farmers market complete with vendors, artists and live music. Porter decided to call it True Local Market and set up shop in Rainbow, which operated every Saturday and Sunday.

Porter's market has hopped to different venues around the city, including at Northpark, an area near M7 Coffee House in Ridgeland and a green space at First United Methodist Church in Ridgeland.

For a year now, it's been a safe haven for Jackson-based farmers and creatives.

One of the creatives is Brian  Newman, who makes pottery in Jackson, the city he was born and raised in. He started taking pottery classes in 1998 and practiced as a hobbyist, though he wanted to devote more time to it. A job in landscaping was the main obstacle.

"You never have time to do your pottery when you're working," he says.

These days Newman is on a sabbatical from landscaping, instead putting his energy into hand-thrown, hand-built pottery via his small business, Hobo  Pottery, which he started a year and a half ago. The name joins his two passions travel and his craft of choice.

Fulfilling passions isn't everything, though. Newman can't afford to rent his own space right now. One location he considered cost $750 a month.

Newman hopes to one day open a collective studio with other artists, but for now True Local is one of the farmers markets keeping him close to the potter's wheel. Affordable sliding vendor fees, flexible scheduling and crowds of as many as 100 appealed to him. Most days he's the first one there and last one out.

Liz Smith, who sells under the moniker Inspired Dreamz, was another unlikely vendor. She grew up loving jewelry, but never thought she would make and sell it for a living, she says. After a series of dreams where she did just that, she bought the copper and other materials needed, watched some YouTube tutorials and got to work.

True Local Market relocated to  Cultivation Food Hall June 1, where  Porter hopes to attract some bigger vendors. He would like to open another location in downtown Jackson on Wednesdays. He is also looking to partner with other venuess

True Local Market is on Saturdays from 2 p.m. to 6 p.m. at Cultivation Food Hall. For more information, find the event on Facebook.