Lottery Board Vice Chairman in Talks to Become UM Chancellor 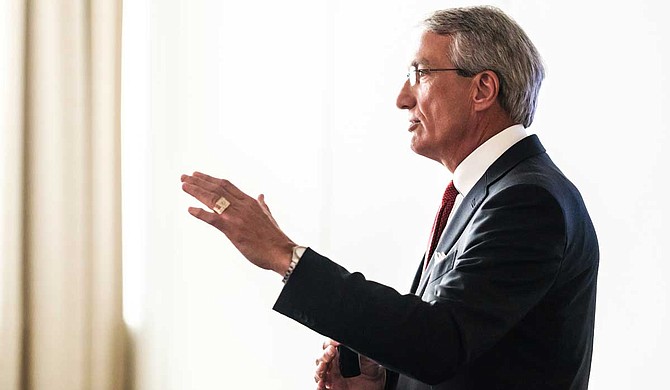 Gerard Gibert, the vice chairman of the Mississippi Lottery Corporation, says he's interested in becoming chancellor of the University of Mississippi. Photo by Ashton Pittman

JACKSON, Miss. (AP) — The vice chairman of the Mississippi Lottery Corporation says he's interested in becoming chancellor of the University of Mississippi.

In response to reporters' questions about the Ole Miss job, Gerard Gibert of Ridgeland said Monday, "I was approached by some people that thought I might have an interest in that, and I made clear that I do. I have been through several pieces of that process. Don't really want to disclose specifically what those are."

He said it began with others approaching him, and that he did not initiate the process.

The board that oversees Mississippi's eight public universities announced in June that it had created a 39-member advisory committee for the search for a new Ole Miss chancellor. Jeffrey Vitter stepped down as chancellor in January after holding the job for three years.

Gibert earned a bachelor's degree in accounting from the University of Mississippi in 1980. University leaders typically hold at doctorate or other advanced degree.

Gibert founded Venture Technologies in 1986, and said he sold the Ridgeland-based company in January for $92 million. He spoke Monday at a forum hosted by Mississippi State University's Stennis Institute of Government and the Capitol press corps.

He has raised money for Republicans and has publicly expressed interest in challenging Republican U.S. Sen. Cindy Hyde-Smith in 2020. In response to questions about a Senate race, Gibert said Monday: "I'm not a candidate for office at this point. I'm unemployed. I'm focused on the myriad civic responsibilities and duties I have."

Republican Gov. Phil Bryant appointed Hyde-Smith to the Senate in April 2018 to succeed Sen. Thad Cochran when the longtime Republican retired. Hyde-Smith won a special election in November to complete the rest of the six-year term, which ends in January 2021.

The governor nominated Gibert to the five-member lottery board this year, and the Senate confirmed Gibert and the other nominees. Lottery board members are unpaid, although the corporation has hired some paid staff members, including a president and a communications director. Legislators met in special session last year and authorized Mississippi to become the 45th state with a lottery. Games are expected to start in December.