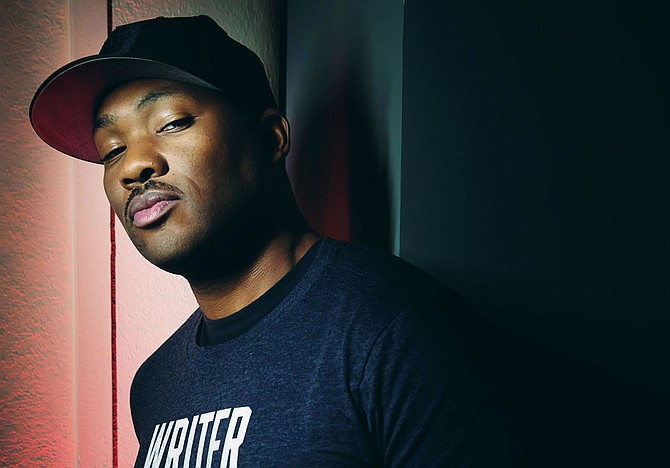 What began as a childhood pastime for Dominique McClellan has developed into his life's work. The Duck Hill, Miss., native grew up on his family's farm. He spent his afternoons, evenings and summers helping maintain crops, feeding livestock and securing firewood for the winter. McClellan passed the time by creating imaginative stories featuring fictional characters.

"Growing up I had an imagination that kept me company, and I would write and create characters to keep myself entertained or let my mind wander while out doing work in the field," he says.

McClellan remembers rewriting lyrics to songs he heard on the radio in the third grade. Around that same time, he began writing poetry. By junior high, he was composing short stories. The Grenada High School alumnus enlisted in the U.S. Army after graduating in 1997. His travels took him to Europe, South Carolina and Maryland, but he never kept too far away from writing.

"During that time I still wrote, but I didn't really focus on it," McClellan says.

After completing a four-year enlistment with the army, he enrolled at Holmes Community College in 2001 to study machine and computer technology. There he took a creative-writing course, and the instructor, impressed with his work, encouraged him to rethink his career path.

"She suggested that I go to a four-year university and pursue something that related to writing," McClellan says.

The suggestion changed the trajectory of his life. In 2002, he enrolled in the University of Mississippi. While there, he enlisted in the Mississippi Army National Guard in 2004. His unit was deployed to Iraq in 2007. When his commander advised the soldiers to find something to keep their mind occupied while in a war zone away from family and friends, McClellan knew exactly what he would do. He began writing a script.

"It was supposed to be a little film, but I wanted everybody to see it, so I thought maybe we could do a skit. I started writing the skit, but I'm kinda long-winded when I write," he laughs.

While he was still in Iraq, McClellan enlisted the help and talent of his fellow soldiers to put on the performance. He held auditions for a cast, many of whom were soldiers. One friend who played for the base's chapel pulled together a group of musicians and helped create the music. Friends he knew from the Army who were engineers helped build the set and lighting setup. The result was a full theatrical production and the first-ever viewing of "The Wedding Party."

"It was absolutely amazing," he says. "It was almost sold out. Almost 800 soldiers showed up."

The play's success reignited a fire in McClellan, but he understood accomplishing his goals would not be easy. He returned to the University of Mississippi after the deployment and added theater as a second major. He graduated in 2010 with bachelor's degrees in mass communication and theater.

He moved to New Orleans without a place to live and with little money, and spent the next six months living out of his car and taking odd jobs working behind the scenes of movie sets. Eventually he found a home that doubled as his rehearsal studio. He auditioned a cast, secured a location and again brought his play to the stage. The overwhelmingly positive response convinced McClellan that this was the right move. He has now produced the play in Louisiana and Mississippi, and it is scheduled to become a full-length feature film.

The comedy recounts the story of a mother who is preparing a pre-wedding dinner for her son and his fiancee. The evening reunites family that a divorce has divided. The story follows the mother, who is attempting to show the family that she has survived the ordeal unscathed, when she really has not. Other unresolved issues bubble to the surface, including the mother's tumultuous relationship with her youngest daughter. As the evening progresses, the family's discussion begin to resolve long-held and deep-seated issues.

"It's a comedy, but it deals with real issues. It deals with teenage pregnancy, divorce, an overbearing parent, diabetes, trust and infidelity. It touches a lot of topics," McClellan says.

McClellan hopes that the work will open discourse for families.

McClellan will produce "The Wedding Party" at the Alamo Theater (located at 333 N. Farish St.) at on Aug. 31 at 7 p.m. Purchase tickets here or through Eventbrite. Tickets may also be purchased at the door.