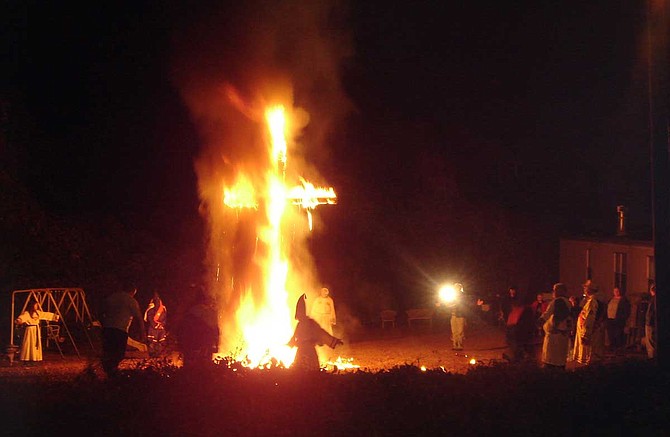 Cross burnings have historically been used by racist groups such as the Ku Klux Klan to rally supporters and terrorize black people in the South and elsewhere. Photo courtesy Confederate Till Death

A white man has admitted in federal court that he burned a wooden cross in an effort to frighten black families in a small Mississippi town.

Graham Williamson pleaded guilty Monday in U.S. District Court in Hattiesburg to interfering with housing rights and conspiring to use fire to commit a felony. Williamson admitted that he and another man burned the cross to frighten and intimidate African American residents in Seminary, Mississippi, in October 2017, federal prosecutors said Tuesday.

"These types of hateful actions have no place in our communities, and we will continue to fight for and uphold the civil rights of all throughout our State," Mike Hurst, U.S. Attorney for the Southern District of Mississippi, said in a statement.

Williamson faces up to 30 years in prison when he's sentenced Nov. 5.

An accomplice, Louie Bernard Revette, pleaded guilty to similar charges in April and is to be sentenced next month.

Seminary is a town of about 300 people, 70 miles (113 kilometers) southeast of Jackson.

Cross burnings have historically been used by racist groups such as the Ku Klux Klan to rally supporters and terrorize black people in the South and elsewhere.

The U.S. Department of Justice's Civil Rights Division was involved in prosecuting the case. Its caseload "serves as a stark reminder that discrimination continues to be a reality for many people," Eric Dreiband, assistant attorney general for the division, told a Congressional subcommittee in March.

In 2017, a man pleaded guilty to federal charges after prosecutors said he and three other men burned a cross more than 6 feet (1.8 meters) high in the front yard of an interracial couple's home in Port Richey, Florida, in 2012.

Other cross burnings in the past decade have occurred in Richmond Hill, Georgia; Minor Hill, Tennessee; Woodland, Pennsylvania; Salado, Arkansas; and Bennington Township, Ohio, among other places, according to records from the Justice Department.