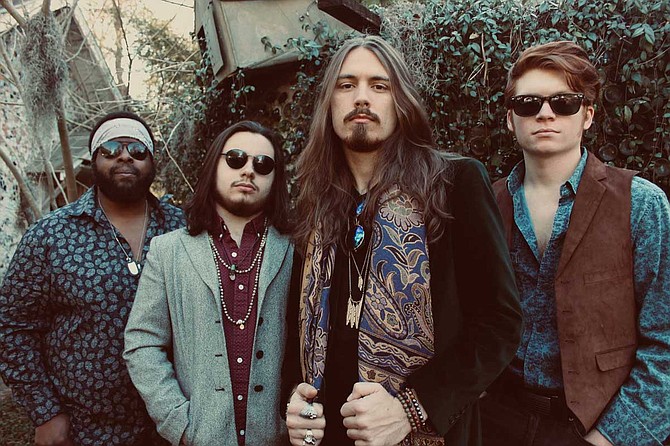 Gulfport, Miss., native Magnolia Bayou is one of several bands that is attracting notice from outside the state. The band is embarking on a national tour, which includes a stop at Jackson's Duling Hall on Friday, April 19. Photo by Piper Leith

If rock music has not exactly been dead in Mississippi for the past 40 years, it certainly seems to have been in a state of prolonged suspended animation, with country music and R&B ruling the charts. But some bands in Mississippi are starting to change the conversation around rock music in the state. Gulfport, Miss., native Magnolia Bayou is one of several bands that is attracting notice from outside the state. The band is embarking on a national tour, which includes a stop at Jackson's Duling Hall on Friday, April 19.

"We'd get together in the afternoon after jazz band and just chop out on stuff," Palmiero says. "We started playing some blues and doing some experimenting with various rock songs we liked."

After the band added a drummer, the trio began playing some local dates and gaining valuable experience.

"We got so many double takes from people—there aren't that many kids coming out of high school playing deep blues and old school rock 'n' roll," he says. "People couldn't believe that music was coming out of us. They'd stop to look and stay to listen."

Vocalist Andrew Fulton grew up in the same neighborhood as Palmiero.

"Dylan and I go way back," Fulton says. "I'm a couple of years older than he is. You know the mentality at that age—'Who's this kid wanting to hang out with me?' He used to come up to me and ask me if I wanted to jam with him, but I had my own friends playing music."

The two reconnected later when Fulton was a sophomore in college.

"I was playing guitar in a band and building pedal boards and stuff," he says. "Our relationship stemmed from the fact (that) we were both a couple of gear nerds. Dylan and Josh had a band, and their singer had left, and I was just getting ready to leave my band. I really wanted to play guitar, but Dylan and Josh said what they needed was a vocalist. I had done a little singing in church, but that was about it. So I said, 'What the hell? I'll give it a shot.'"

Estes and Palmiero enlisted the first of a sequence of drummers and, with Fulton, the band began playing local gigs.

Palmiero, in particular, had a deep grounding in rock music from which he drew as he experimented with his own style. He went to his first concert—KISS—when his mom, Janet Palmiero, was six or seven months pregnant with him, he says.—

"My dad (Kevin Palmiero) named me after Bob Dylan, and that was the first real concert my dad took me to when I was (4 years old)," he says.

But Dylan Palmiero's musical epiphany with blues guitar occurred when his father took him to a Buddy Guy concert around the age of 11.

"I couldn't take my eyes off (Guy)," he says. "I was whooping and hollering in the front row and waving at him."

Guy motioned him over, he says, and he climbed over the barricade in the front. The security guard tried to stop Palmiero, but Guy waved the guard off and then gave Palmiero his pick.

"I remember it was just completely sawed off," he says. "That's when I really fell in love with blues guitar."

Initially a percussionist, Estes switched to the bass during his senior year of high school when a slot opened up in the jazz band.

"[M]y dad bought me a $100 bass at a pawn shop, and not long after that Dylan and I started jamming," Estes says.

Fulton says: "Dylan and Josh's jazz background has given our music more diversity overall. They came in with that experimental, improvisational mentality, and it's just kind of stuck with us."

Drummer Cedric Feazell is a recent addition to the band. After playing in indie-rock bands for six years, Feazell joined the Army in 2009. His eight years in the service included a tour in Iraq. After he left the military, he drove 18-wheelers until he got a message on Facebook from Fulton inviting him to try out to become Magnolia Bayou's new drummer.

"I came in, and it all worked out great," he says. "The chemistry has been really good. Josh and I work really well together."

The band released its eponymous debut CD in May 2018. Recorded in New Orleans, the album covers ambitious musical terrain. Black Sabbath influences are apparent, including a devastating treatment of "Faeries Wear Boots," and "Tired,"—a number that features a chromatic walk down that lends the song a restless edginess. One can also hear other influences. For example, "Storm" gives a nod to Aerosmith, while "Mr. Green" offers up a Latin-flavored jam in the tradition of Santana's "Soul Sacrifice."

Fulton says about the band's show at Duling Hall tonight: "We love playing Duling Hall. The sound is amazing, the audiences are great. And it's a hollow stage—the whole thing resonates. Cedric loves it because it's like a big subwoofer for him. It's one of our favorite venues anywhere to play."

Magnolia Bayou will perform at Duling Hall (622 Duling Ave.) on Friday, April 19, at 8 p.m. Tickets are $10 in advance and $15 on the day of the show. Royal Horses also performs. For more information, visit ardenland.net.