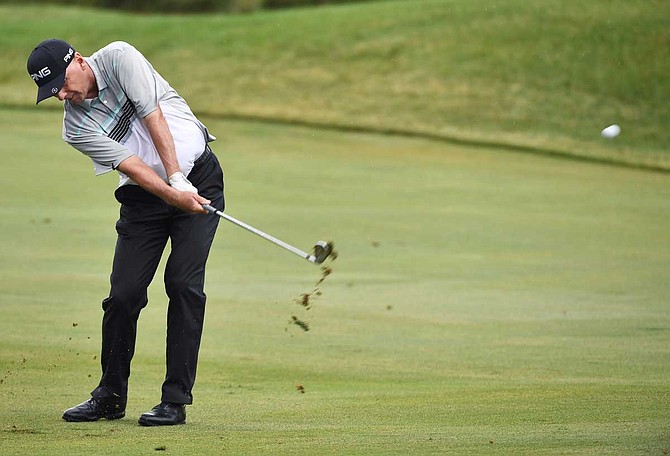 BILOXI, Miss. (AP) — Kevin Sutherland made his first birdie in two days, and it was all he needed to finally win for the second time on the PGA Tour Champions.

Sutherland, bothered overnight by a 2-foot putt that could have ended the sudden-death playoff, holed an 18-foot birdie putt on the seventh extra hole Monday morning to beat Scott Parel in the Rapiscan System Classic at Fallen Oak.

Sutherland didn't make a birdie in the final round Sunday when he closed with a 75. Parel made an 18-foot birdie on the last hole in regulation for a 69, forcing a playoff. Sutherland missed his 2-footer on the second extra hole, and Parel made a 12-foot par to stay alive on the fifth extra hole.

That's when it was too dark to keep playing and led to a Monday finish and a bad night of sleep for Sutherland.

"It's all good now," Sutherland said. "Last night, I didn't sleep well. I was constantly thinking about that putt I missed. I was surprised I missed it. Hey, it was not an easy putt and it didn't go my way. But I got a second chance. I'm ecstatic. I'm sorry everyone had to come back today."

It ended on the 18th hole, which they played for the seventh time — once in regulation Sunday, four times in the playoff, and then twice more Monday.

Sutherland missed from 25 feet in the sixth playoff hole when it resumed Monday, and Parel got up-and-down from a bunker with a 10-foot par save to again extend the playoff. And on the seventh try, Sutherland got it right.

It goes down as the first time in eight tries that Sutherland converted at least a share of the lead going into the final round into a victory.

Sutherland, who joined Parel at 7-under 209, won $240,000 and moved to No. 2 in the Charles Schwab Cup standings behind Bernhard Langer, who tied for fifth in the tournament.