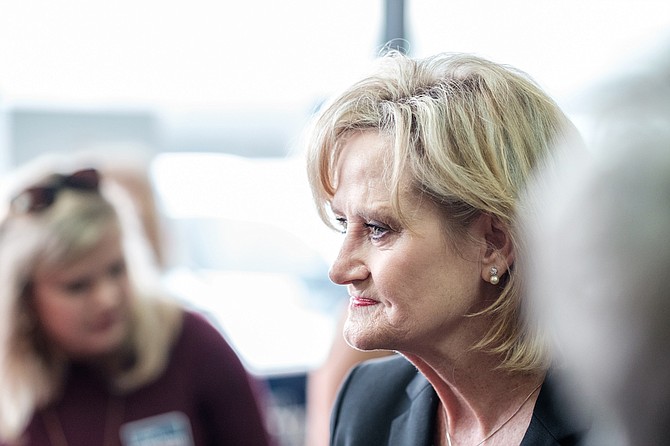 "Cindy Hyde-Smith's comments have inflamed our nation for one simple fact: It's because we expect more. We know that our elected representatives and officials have to be better than this." —Duvalier Malone; photo of Gov. Phil Bryant (left) and Cindy Hyde-Smith (right) taken by Ashton Pittman at a rally in Hattiesburg on Nov. 5

There was a time when it wasn't too much to ask that our political leaders not use incendiary and racially suggestive undertones, and that they treat all with respect and dignity. But in this age of Donald Trump, there's a degenerative tone of discourse that we are beginning to normalize.

Every time someone like Mississippi Gov. Phil Bryant steps forward to defend heinous comments like these, we are destabilizing all the progress we have made since the Civil Rights Movement.

Cindy Hyde-Smith's comments have inflamed our nation for one simple fact: It's because we expect more. We know that our elected representatives and officials have to be better than this. Her comments have no place in acceptable public dialogue.

There may be some of you who are wondering: Are we doing the right thing by holding our officials to the highest level of accountability? Emphatically, yes! This is what we have to do with everyone, not just Ms. Hyde-Smith. We have to hold everyone accountable for what they say and what they do. I often write about how we, the people, must demand a seat at the table with our political leaders, and how we must oust those that don't do the will of the people. This is important, because make no mistake: Whoever we elect in positions of political leadership represents all of the people—whether you voted for them or not.

This is why we must hold our political leaders to a standard that adequately represents the people.

It's not okay to offend the people that you work for. Every political leader is (supposed to be) the servant of the people. How can you serve us if you refuse to recognize us?

These were Hyde-Smith's words: "In a comment on Nov. 2nd, I referred to accepting an invitation to a speaking engagement. In referencing the one who invited me, I used an exaggerated expression of regard, and any attempt to turn this into a negative connotation is ridiculous."

To Hyde-Smith, I ask a simple question: What are the positive connotations associated with public hangings (lynchings)?

Oxford Living Dictionary defines “connotation” as “an idea or feeling which a word invokes for a person in addition to its literal or primary meaning.”

What positive feelings are associated with public lynchings in Mississippi? Ms. Hyde-Smith, feel free to provide examples of these positive feelings that you speak of, because that's not the reality that I and other African Americans see.

The words that you used have evoked horrible imagery of a terrible time in our history, where black people were terrorized and oppressed. If you have any examples of a time when this was not negative, then it should be easy to find, because there are many examples to choose from since Mississippi has the most documented hangings of any state in the union.

We've been there before. There have been dark times in the history of our state and our nation where evil acts were committed against innocent citizens without fear of consequence. We cannot allow ourselves to be dragged back to the past that we have been fighting so hard to escape.

What does it say about us as a state if we allow this type of divisive and hateful language to overtake our politics?