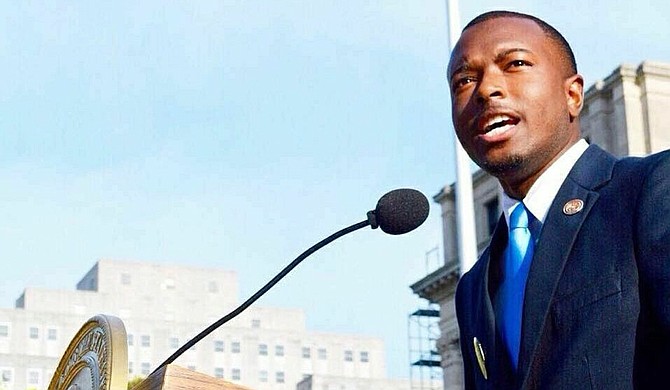 Jeramey Anderson, one of the youngest lawmakers in the Mississippi Legislature, is challenging Congressman Steven Palazzo to represent District 4 in November. He did not have a primary challenger. Photo by Jeramey Anderson Campaign

Mississippi’s 4th Congressional deserves better representation in Congress. Currently, the district has a representative by name, but does not have the accountable representation they need. Citizens of South Mississippi need someone who wants to represent the people’s interest and concerns over that of outside corporations and donors’ interest. I too have real life experience working within a legislative body. However, I know how to negotiate across bipartisan lines to meet the needs of my constituents and move us onward. South Mississippi needs someone who will represent them and work for all regardless of partisan differences, and I am the only candidate who is dedicated to doing that.

In 2017, I added an amendment to Senate Bill 2463 that changed the way Moss Point School District’s Board of Education members were selected. The members, appointed to positions by the city’s Board of Alderman, left out nearly any process of accountability. The state had given the district a letter grade of “D” when it came to accountability. I made the decision that we needed to elect our school board officials. Our accountability should always be held by the community, especially when it comes to the education of our children. This was not supported 100% by everyone in my district; but I felt like it was the best decision to address the level of complacency the board had achieved. Another issue also had to do with education; the MS House majority wanted to develop a new funding formula for our education budget. This change would have had a significant financial impact on the City of Moss Point and their already strapped budget. I argued hard against the change on the floor, but the majority was never in our favor and it passed as expected. Immediately I began to work with the superintendent and my constituents, calling for a town hall meeting to discuss what was going to happen and ways to lessen the blow our children’s education was about to suffer.

Fortunately, the bill ended up dying in the MS Senate much to everyone’s surprise. Regardless, I wanted to make sure my community was given all the necessary information and had a chance to be proactive against the massive amount of funds that were going to be cut from our district.

Our current Congressman has voted to expand leases to increase offshore drilling right off the shores of our Gulf Coast. If he would bother to come home more often, he would understand the economic impact of oil spills to our fragile ecology and economy. He also supported and voted for legislation to deregulate safety protocols put in place after the BP Oil Spill.

Again, this is reckless and disrespectful to our district and its residents. The Trump administration is making plans to roll back the ban on new offshore drilling sites. Along with opening up the Atlantic coastal waters for oil companies to set up rigs, the proposal will also allow for 12 more rigs to be opened in the Gulf of Mexico. To add insult to injury, his administration has rolled back regulations and safety protocols that were put in place on the oil drilling industry after the 2010 Deepwater Horizon catastrophe. How quickly we have forgotten that crisis, that not only drained our economy but also killed hundreds of marine animals. This is a mistake, it’s bad policy, and it is detrimental to the entire Mississippi Gulf Coast. I would not support any legislation where the dangers greatly outweigh the benefit to our district.

Likewise, I would have voted against the Tax and Jobs Act that was passed recently. I know this sounds harsh on face value. How could you vote against tax breaks for your constituents? My reasoning - it just was not the right legislation for the true, sustainable, economic relief needed. The PR tour is over and reality has set in for many. The tour was given by the proponents of the legislation. Sure there have been a few gains, and some employees have received bonuses via the temporary breaks, but corporations are not expanding by creating more jobs - as the bill and it’s proponents promised. Some paychecks are slightly more, with exemptions and withholding rates changing, but again this is temporary for the people. The tax breaks providing the gains to corporations, on the other hand, are permanent; and it is they alone who are reaping the long term benefits. The small gains that people of District 4 are seeing are comparable to a sugar rush. It will help in the short term but eventually leave them empty again and the national debt bloated - possibly beyond recovery. I thought the GOP stood against increasing the federal debt!?

A Living Wage. We have to accept that people are not being paid enough to support a household. The insufficient amount they receive in wages goes into their accounts and is immediately grabbed up by high rents or mortgages, credit companies, payday lenders, and healthcare costs. At the end it is lucky to have enough income left over for groceries. The wage gap is killing our lower and middle class Americans, driving the “brain drain”, and we have to do something about it. The economy cannot survive if those that are responsible for demand cannot afford to contribute to the market.

I have the honor of continuing to represent the good people of Mississippi’s 110th House District in the state legislature. I will continue to work for my constituents as their voice and advocate for a better community.