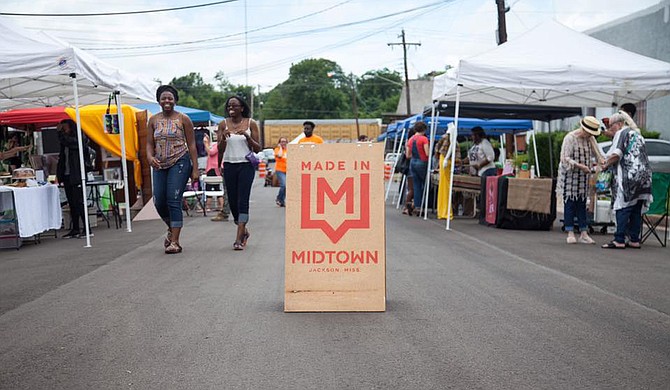 Since Midfest's start in 2014, the street festival and block party has been focused on celebrating what the midtown area has to offer, showcasing local businesses and the creative talents of its residents.

"It's a chance to bring the neighborhood together and have a good time," says Business Association of Midtown President Roderick Red.

Jackson artist Adrienne Domnick started the event while she was serving as president of BAM.

"I just wanted a centralized area where we could come out of our studios and have a block party," she says.

The first Midfest started as just one block on Wesley Avenue. This year's festival, which takes place on Saturday, May 19, will feature booths from more than 20 vendors along that street.

"It was perfect to have it on Wesley because Offbeat had just opened," she says. "It was the first event where we saw a lot of midtown community participation."

Clouds & Crayons, which includes vocalist Astin Sullivan (right) and instrumentalist Loki Antiphony (left), was one of the local musical acts who performed at the 2017 Midfest.

Because midtown is an arts district, Red says Midfest places a huge emphasis on local art. Some of this year's art booths include anime- and pop-culture-themed merchandise from PixelMoth Apparel, vintage assemblage art from Curious Revival, and jewelry from Xcessory Freex.

The Ladybug Club, a midtown organization for mothers and daughters that promotes education, community service and positive mother-daughter relationships, will also sell lemonade.

"It's truly one big neighborhood," Red says. "I love the eclectic mix of businesses and people, and I love when people are surprised to see all that we have to offer in midtown."

Though the block party will begin at 3 p.m., many of the businesses in the area will be hosting activities throughout the day. Red Squared Productions, which Red owns, will have its office open for tours, AND Gallery will feature music from Spectral Wave, and Pearl River Glass Studio will have a gallery with artwork from owner Andy Young.

The Good Samaritan Center and its resale store, N.U.T.S., will kick things off that Saturday with the Midfest Flea Market from 9 a.m. to 5 p.m. Early-bird admission is $5 from 9 a.m. to 10 a.m., and admission is free after 10 a.m. The event will have hotdogs and hamburgers for sale, as well as free Blue Bell ice cream for shoppers. There will also be a bouncy house for children.

"We want to show our support because we care about our community," Joanna Puddister King, director of public relations and marketing at The Good Samaritan Center, says.

Offbeat will host its monthly "Significant Saturdays" event and have special pins for sale in celebration of the business' fourth anniversary. The store will also host a performance by NF//GS at 3 p.m. and a special edition of its concert series, "Jujutsu: Vibes, Anime, Chill," at 8 p.m.

Businesses such as The Reclaimed Miles and Lucky Town Brewing Company will also have music. This year, the Southern Komfort Brass Band, will march down Wesley Avenue for a second-line parade.

"It'll be a great way to cap off the event," Red says.