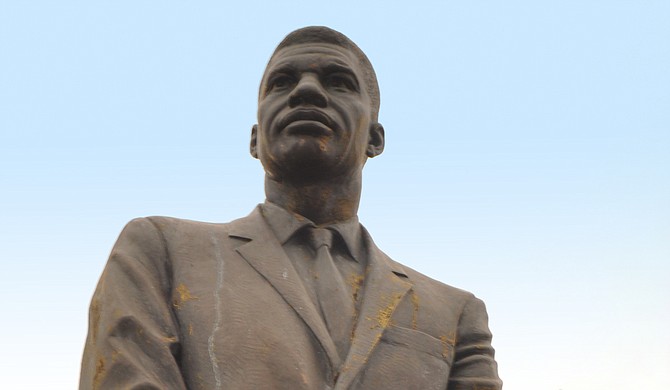 JACKSON, Miss. (AP) — The Mississippi Civil Rights Museum and other places in the state are honoring the legacy of civil-rights leader Medgar Evers, 55 years after he was assassinated.

Evers was born in Decatur, Miss., and enlisted in the United States Army in 1943. He fought in France and Germany during World War II and received an honorable discharge in 1946. He graduated from Alcorn Agricutural and Mechanical College, which is now Alcorn State University, in 1952 and began working as an insurance salesman in Philadelphia, Miss. Evers and his older brother, Charles Evers, also worked with the National Association for the Advancement of Colored People in Philadelphia.

After the Supreme Court Brown v. Board of Education decision in 1954, Medgar Evers attempted to enroll at University of Mississippi Law School, but the university denied him. His efforts to desegregate the college led to the NAACP naming Evers as the organization's first field secretary in Mississippi, and he moved to Jackson later that year. As field secretary he led voter registration drives and boycotts to push for racial equality in the state.

On June 12, 1963, Ku Klux Klan member Byron De La Beckwith assassinated Evers in his own driveway in front of his wife, Myrlie Evers-Williams, and the couple's three children. Evers-Williams fought to bring her husband's killer to justice, and after two unsuccessful trials, a jury finally convicted Beckwith of the murder 31 years later in 1994.

In 1995, Evers-Williams became the national NAACP chairperson, and she held the position until 1998. She also founded the Medgar & Myrlie Evers Institute in Jackson, which is dedicated to promoting integrity, dignity, self-determination, and social and economic justice.

Several churches across the state plan to toll their bells Tuesday in remembrance of Evers.

The civil rights museum, which opened in December in Jackson, is hosting an evening event that includes a presentation by Michael V. Williams, a professor at University of Texas at El Paso who wrote, "Medgar Evers: Mississippi Martyr."

The Jackson Free Press contributed additional reporting to this story.