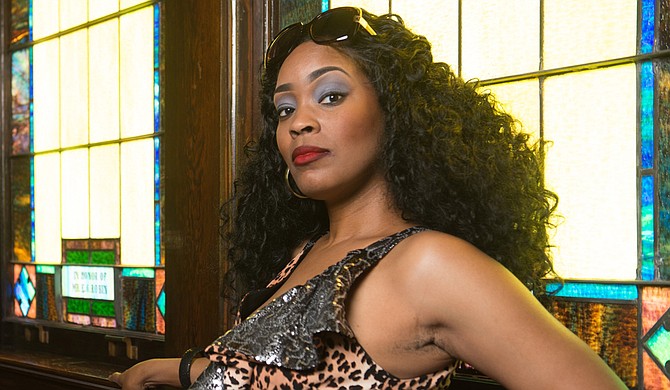 On the Friday before New Stage Theatre begins its production of the play, "Sister Act," on May 29, some of the cast mates who play nuns were on the tin-roofed theater's stage, rehearsing a dance in front of a long mirror. They sang quietly as they walked through the movements slowly and with an attentive self-awareness. Afew weary, non-nun castmates are seated in the stands—a collection of about 40 chairs. They watched as their lead actor, Kimberly Morgan Myles, danced slowly, her back turned as she judges her performance in the mirror.

"Sister Act" is a musical based off the 1992 film of the same name, which starred Whoopi Goldberg as the main character, Deloris (Myles' role), and Dame Maggie Smith as Mother Superior, with music from composer Alan Menken. The plot centers around a woman whom the Witness Protection Program places in a convent after she witnessed her boyfriend commit a murder. She is not Catholic, but she has to pretend to be for much of the production. As a result, she comes into conflict with the Mother Superior (whom Jessica Wilkinson plays), who aims above all else to uphold the tradition and sanctity of the convent.

"She goes into hiding in a convent, and she developed friendship while there," Myles said. "She didn't want to go there—a complete contrast of her lifestyle, but she finds peace, solace and friendship. ... I think the story relates to me a bit because I know I was a little girl who had big dreams—that I had big dreams to be a star, so to speak. ... Later on (I) found out that there were more important things than fame and fortune and, you know, having your name in lights—having peace of mind, friendship, family, love—and I think that really is thematic for what this particular production is about, and I hope the audience get that."

Myles has also been in other New Stage Theatre's productions, including "It Ain't Nothin' But the Blues" in 2015. She practiced theater and music when she attended Lafayette High School in Oxford, Miss. She got her bachelor's degree in vocal music at Alcorn State University, and her Master of Fine Arts in acting from the University of Southern Mississippi. She also studied and performed abroad in London, Scotland and Paris, as well as in cities across the United States. She also became Miss Mississippi back in 2007. Now, she teaches theater and creative writing at Tougaloo College.

Director William "Peppy" Biddy has directed more than a dozen plays for New Stage Theatre, including the aforementioned "It Ain't Nothin' But the Blues" in 2015 and "Vanya and Sonia and Masha and Spike" in 2017.

"I think the thing that is the most surprising in whether people know the movie or not—because I know people are already familiar with the movie— ... is that the play really does have a big heart to it, and in the end that's really what it's all about," he said. "All the comedy and all the shenanigans are the fun part, but it leads us to the place at the end where the different worlds realize that they have something in common. And so every time we get to that moment, it's a moment in the rehearsal room because it's really sweet and it really works."