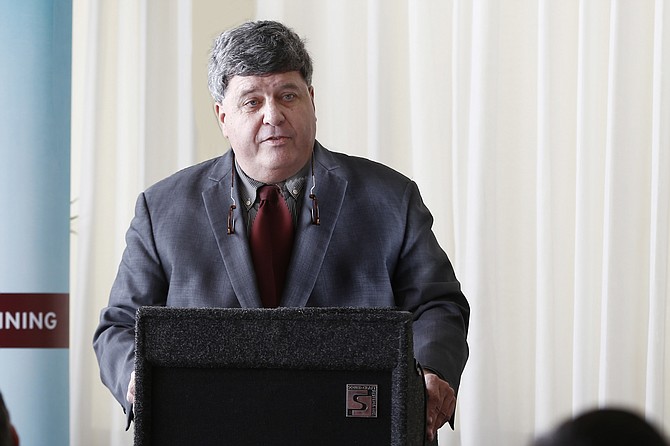 In a statement Thursday, Senate President Pro Tempore Terry Burton of Newton and House Speaker Pro Tempore Greg Snowden (pictured) of Meridian said news conferences with 25 or fewer participants are allowed inside the Capitol, but rallies are supposed to be outside. Photo by Imani Khayyam.

JACKSON, Miss. (AP) — Top Mississippi lawmakers said Thursday that they take full responsibility for an event that violated a policy against rallies being held inside the state Capitol.

Hundreds of people gathered in the Capitol rotunda Tuesday for an event promoting "school choice" — allowing people to pay for private school with public money.

Empower Mississippi, the group that organized the event, promoted it as a "rally," and some participants carried posters. Gov. Phil Bryant, Lt. Gov. Tate Reeves and House Speaker Philip Gunn, all Republicans, spoke in favor of school choice at the event, receiving cheers and applause from the crowd that included school children wearing bright yellow scarves provided by the organizers.

In a statement Thursday, Senate President Pro Tempore Terry Burton of Newton and House Speaker Pro Tempore Greg Snowden of Meridian, also Republicans, said news conferences with 25 or fewer participants are allowed inside the Capitol, but rallies are supposed to be outside.

"Unfortunately, enforcement of this policy has been lax, uneven, and sometimes even non-existent, and for this we take full responsibility," Burton and Snowden said.

A parent who wanted to have an event supporting public schools said the state Department of Finance and Administration denied her request to reserve space for the event inside the Capitol after she said she expected at least 100 people to attend, Mississippi Today reported Wednesday.

Burton and Snowden said that the existing policy banning rallies inside the Capitol "will be strictly enforced immediately."

"We acknowledge that enforcement of this pre-existing policy at this time (mid-session) opens us up to the allegation that we are somehow playing favorites or appearing unfair," Burton and Snowden said in the statement. "We accept the unfortunate optics of the situation we find ourselves in. Regardless, however, we are not prepared to allow a bad situation to worsen through continued inaction."