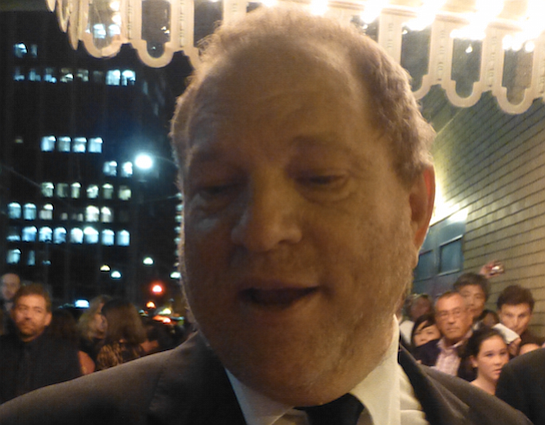 New York's attorney general is accusing Hollywood movie producer Harvey Weinstein of "repeatedly and persistently" sexually harassing female employees at his film company, according to a lawsuit filed on Sunday by the state prosecutor that could impact the company's potential sale. Photo courtesy Flickr/GabboT

NEW YORK (AP) — New York's attorney general is accusing Hollywood movie producer Harvey Weinstein of "repeatedly and persistently" sexually harassing female employees at his film company, according to a lawsuit filed on Sunday by the state prosecutor that could impact the company's potential sale.

"As alleged in our complaint, The Weinstein Company repeatedly broke New York law by failing to protect its employees from pervasive sexual harassment, intimidation, and discrimination," state Attorney General Eric Schneiderman said in court papers filed against Weinstein and the company.

Schneiderman launched a civil rights probe into the New York City-based company in October after The New York Times and The New Yorker exposed allegations of sexual assault and harassment spanning decades.

Weinstein's attorney, Ben Brafman, released a statement Sunday evening saying many of the allegations against his client are "without merit."

"While Mr. Weinstein's behavior was not without fault, there certainly was no criminality, and at the end of the inquiry it will be clear that Harvey Weinstein promoted more women to key executive positions than any other industry leader and there was zero discrimination at either Miramax or TWC," Brafman said.

Scores of women, including well-known actresses, have come forward with stories of forced sexual encounters. Weinstein was fired by the film company he founded with his brother Robert and expelled from Hollywood's movie academy.

The attorney general's office said the lawsuit was filed on Sunday partly due to reports of the company's imminent sale, saying it believed it would leave victims without adequate redress.

"Any sale of The Weinstein Company must ensure that victims will be compensated, employees will be protected going forward, and that neither perpetrators nor enables will be unjustly enriched," court papers said.

Schneiderman's investigation found that employees were subjected to various verbal threats from Weinstein such as "I will kill you, I will kill your family, and "you don't know what I can do."

"To work for Harvey Weinstein was to work under a persistent barrage of gender-based obscenities, vulgar name-calling, sexualized interactions, threats of violence, and a workplace general hostile to women," according to court papers.

In one case, the probe found that "in a fit of rage against one female employee, he yelled that she should leave the company and make babies since that was all she was good for."

Female executives were forced to facilitate Weinstein's sexual conquests with promises of employment opportunities to women who met his favor, according to the lawsuit, which also accused the company of being "responsible for the unlawful conduct" by failing to stop the abuse.

The company and co-owner Robert "are liable because they were aware of and acquiesced in repeated and persistent unlawful conduct by failing to investigate or stop it," court papers said.

Representatives for Weinstein have previously denied all accusations of non-consensual sex.