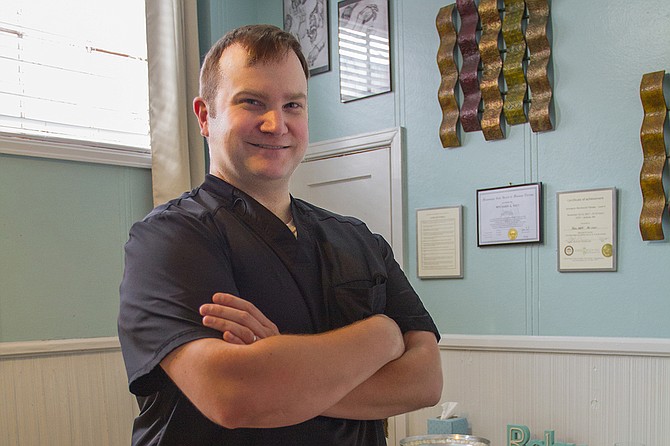 While getting a massage one day, Ben Witt began to think to himself, "Hey, I can do this. I can be a massage therapist."

Witt liked that the practice was quiet, thoughtful and rewarding, and also the one-on-one aspect of it.

Witt, a Franklin, Tenn., native, graduated from Millsaps College in 2001 with bachelor's degrees in anthropology and French before receiving his master's degree in applied geology with an emphasis in applied geography from the University of North Texas in 2003.

He moved back to Jackson in summer 2011. He worked as a software trainer at the University of Mississippi Medical Center from February 2012 to July 2012, and as a French teacher at Brandon High School from July 2012 to May 2015.

After the revelation about massage therapy, Witt decided to switch gears from teaching. He graduated from Healing Touch Career College in Jackson in 2016 and from there, he got his license with the Mississippi Board of Massage Therapy.

"The road to massage therapy for me was a series of different chapters in life," Witt says. "Having changed locations, (I) had the opportunity to self-reflect. I had the privilege of choosing massage therapy as a new career."

Currently, he practices massage at Jax-Zen Float in midtown.

Witt says a massage therapist is someone who adds their own flavor and style to the technical skill of massage, all while promote healing and relaxation. His therapies include total relaxation services such as deep-tissue techniques, synergetic myofascial therapy (posture management and realigning connective tissue to improvement movement) and more.

Witt likes that being back in Mississippi gives him a sense of connectivity with his massage-therapy clients. He finds reward in people feeling grateful for his work. "(Massage therapy) has value in the community," he says.

He says that as a massage therapist, it's important to be present during sessions so he can give his clients high-quality service.

"Not all experiences will be the same for people, so it's very important for me to build special connections with each (person)," Witt says.