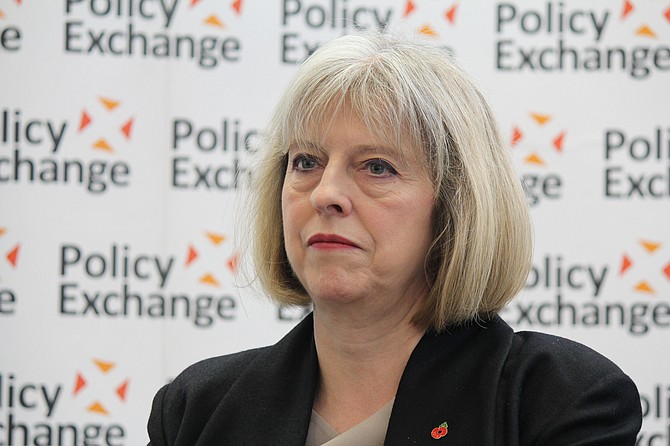 Britain is prepared to abide by European Union rules and pay into the bloc's coffers for two years after leaving the EU in March 2019, Prime Minister Theresa May said Friday in a conciliatory speech intended to revive foundering exit talks. Photo courtesy Flickr/Policy Exchange

FLORENCE, Italy (AP) — Britain is prepared to abide by European Union rules and pay into the bloc's coffers for two years after leaving the EU in March 2019, Prime Minister Theresa May said Friday in a conciliatory speech intended to revive foundering exit talks.

The proposal got a positive, if muted, reception from the EU's chief negotiator. But it raised hackles among pro-Brexit U.K. politicians, who accused May of delaying a divorce that is sought by a majority of British voters.

May traveled to Florence, Italy — birthplace of the Renaissance — in hopes of rebooting negotiations with the EU that have stalled over issues including the price the U.K. must pay to leave and the rights of EU citizens in Britain.

With 18 months to go before departure day in March 2019, May's speech was intended to kick-start the process before talks resume next week in Brussels. But while it was strong on praise for the EU and for shared European values, the few concrete details were far from addressing Brussels' concerns.

The EU's chief Brexit negotiator, Michel Barnier, said the speech showed a "constructive spirit" but "must be translated into negotiating positions" to make real progress.

Standing in front of a backdrop reading "Shared History, Shared Challenges, Shared Future" in a hall at a Renaissance church, May said Britain and the EU share "a profound sense of responsibility" to ensure that their parting goes smoothly.

She urged the EU to be "creative" and forge a new economic relationship not based on any current trade model. She rejected both a free-trade deal like the one Canada has struck with the bloc and Norway-style membership in the EU's single market.

"Instead, let us be creative as well as practical in designing an ambitious economic partnership which respects the freedoms and principles of the EU, and the wishes of the British people," May said.

May proposed a transition period of "around two years" after Britain leaves the EU for the two sides to work out the kinks in the final Brexit deal.

"People and businesses - both in the U.K. and in the EU - would benefit from a period to adjust to the new arrangements in a smooth and orderly way," she said.

May also signaled willingness to pay a Brexit bill for leaving, saying Britain "will honor commitments we have made."

She reassured other EU members that they need not worry "that they will need to pay more or receive less over the remainder of the current budget plan as a result of our decision to leave." The current EU budget runs until 2020.

May did not cite a figure, and said "some of the claims made on this issue are exaggerated and unhelpful." Reports of the amount the EU is seeking have gone as high as 100 million euros ($120 million).

May also called for a new security treaty between Britain and the EU, saying close cooperation is key to fighting crime, terrorism and military threats. Again, there were few details, just an acknowledgement that "there is no pre-existing model for cooperation" that fits the bill.

Britain is eager to begin hammering out future trade and security relationships, but EU officials say that can't happen until there's progress on three key divorce terms — the status of the border between Northern Ireland and EU member Ireland, the financial settlement and the rights of more than 4 million EU and British citizens hit by Brexit.

When Britain leaves the bloc it will end the automatic right of EU nationals to live and work in the U.K., and that has left many worried for their futures. Previous assurances by Britain that EU nationals already in the country will be able to stay have been rejected as too vague by the EU.

"We want you to stay; we value you," May said, adding that she wanted to write any deal on citizens' rights into British law as a guarantee.

British negotiators hope EU leaders will decide at an October meeting that "sufficient progress" has been made on the divorce terms to move talks on to future relations and trade.

But Barnier suggested more still needed to be done.

"The sooner we reach an agreement on the principles of the orderly withdrawal in the different areas - and on the conditions of a possible transition period requested by the United Kingdom - the sooner we will be ready to engage in a constructive discussion on our future relationship," he said.

Although the speech was directly aimed at the 27 other EU nations, none of their leaders was in the audience to listen to it. May brought along members of her Cabinet, which is split between advocates of a clean-break "hard Brexit" including Foreign Secretary Boris Johnson and those like Treasury chief Philip Hammond who favor compromise to soften the economic impact of Brexit. Both Johnson and Hammond watched May's speech from the front row, and praised it afterward.

In Britain, May's speech drew criticism from her opponents both to the right and the left.

Labour Party leader Jeremy Corbyn welcomed the transition period, but said that "15 months after the EU referendum the government is still no clearer about what our long-term relationship with the EU will look like."