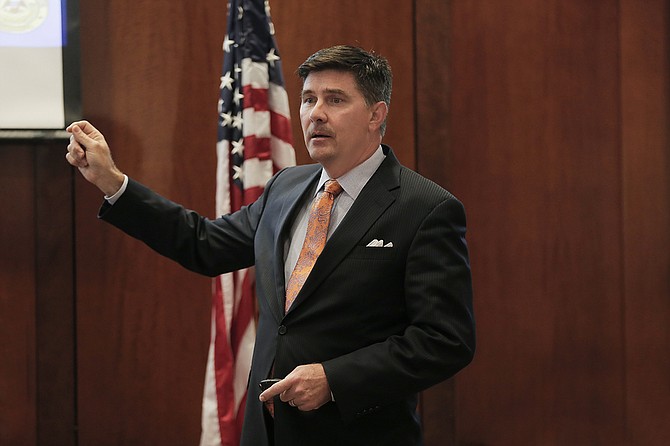 State Auditor Stacey Pickering and a legislative watchdog committee have publicly criticized four sets of contracts that exceeded the minimum threshold for taking bids between 2014 and 2016. Photo by Imani Khayyam.

JACKSON, Miss. (AP) — Mississippi's state superintendent of education says her department is tightening accounting and purchasing procedures, weeks after it was accused of illegally issuing some contracts without taking bids.

State Superintendent Carey Wright, speaking Monday at a luncheon sponsored by the Capitol press corps and Mississippi State University's Stennis Institute of Government, said it's possible that State Auditor Stacey Pickering has correctly accused the department of illegal activity, but said it's too early to draw any conclusions.

"I'm open to whatever he's saying is happening," Wright said. "I'm not sure that it's happening. I think what we have to do is not get ahead of ourselves," she said, saying Pickering's employees and the department's internal auditors are still making inquiries.

Pickering and a legislative watchdog committee have publicly criticized four sets of contracts that exceeded the minimum threshold for taking bids between 2014 and 2016.

The Republican auditor accused the department of "blatant disregard" for purchasing laws, saying it broke state law when it set up an alternative method of selecting contractors from a pre-qualified pool, and may have broken state law by splitting contracts to evade what was then a $100,000 threshold to take bids. The department said the pool method had been approved, but has since stopped using it.

The department issued five contracts collectively worth more than $200,000 to Research in Action, a company associated with former department employee J.P. Beaudoin in 2015.

Blue Sky Innovative Solutions, a company owned by John Q. Porter, who became the department's chief information officer, was paid $342,000 before Porter was hired. The department also hired Elton Stokes and Data One IT, a company run by Stokes' wife, for $263,000 of data management work. Both Porter and Stokes worked in the same Maryland school system as Wright.

Wright said Monday the department is still looking for documents relating to $215,000 it spent with the Kyles Co. in 2015 to provide hardware, services and training to schools through a federal grant program.

"A lot of the internal controls that we needed, she has put into place," Wright said.

In a presentation to the state Board of Education on Thursday, Gavin said the department has hired a new accounting director and is paying an outside company that helps state agencies with accounting to write a procedure manual.

She said the department is now requiring at least two written quotes for contracts between $5,000 and $50,000, and three written quotes for contracts between $50,000 and $75,000. All vendors have to submit sealed qualifications or be on the state's pre-approved vendor list. Gavin said she has to sign all contracts worth more than $50,000 before the state Board of Education considers them, and that program offices must submit written justification for the spending.

Gavin said the department also created a grants management office to handle $835 million in federal money that passes through the department, mostly into the hands of local school districts.