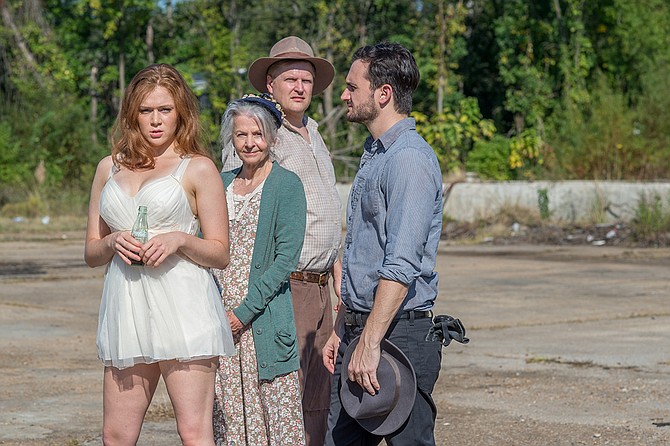 With Mississippi celebrating its 200th birthday this year, New Stage Theatre is paying tribute to one of the state's renowned authors, Tennessee Williams, with its production of "Baby Doll." Pierre Laville and Emily Mann adapted the play from a 1956 film of the same name, which Williams adapted from his one-act play, "27 Wagons Full of Cotton."

This four-person drama takes place in the Mississippi Delta in the 1950s and revolves around 19-year-old Baby Doll and her much older cotton-gin-owner husband, Archie Lee. Baby Doll is in many ways still a child, and the two are waiting to consummate their marriage until she turns 20. When a neighboring Sicilian man's plantation is burned down, he suspects Archie and sets out to seduce Baby Doll as part of his revenge.

Set against the backdrop of mid-20th-century poverty, Reynolds says "Baby Doll" offers a good example of Williams' portrayal of women. "It still gives commentary on society's treatment of women today," she says.

Fans of Williams' work will enjoy the darkly comedic elements of the play, as well as the sensual nature of the storyline that lends to some of the play's  steamier scenes, she says.

"People will recognize Williams' powerfully poetic style, but it's just a little different than his other works," Reynolds says. "It's about how people get into traps and how we break or don't break free of them."

New Stage originally chose to perform Williams' "Eccentricities of a Nightingale," but when the theater got the rights to perform "Baby Doll," Reynolds says they jumped at the chance.

"We knew we wanted to honor Tennessee Williams for the bicentennial, and we wanted a play set in Mississippi," she says. "'Baby Doll' is something we haven't done before, and only three other theaters in the world have put on the production."

Reynolds says New Stage had to get special permission from Sewanee: The University of the South, which owns the rights, to perform the production, and it is the only adaptation that the Williams Estate approved.

"I'm excited that we are getting to premiere this play for the South," she says. "I think people are going to really enjoy it."