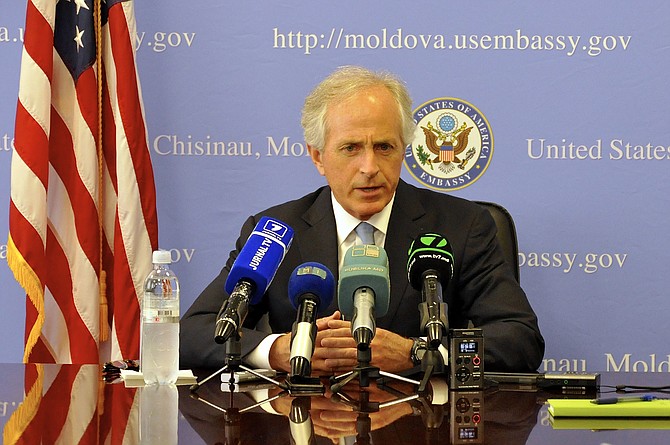 WASHINGTON (AP) — Republicans know who to blame for inaction in Washington—Senate Republicans.

The White House, hard-right conservatives and House GOP lawmakers all directed their ire at the Senate GOP this week amid the escalating feud between President Donald Trump and Republican Sen. Bob Corker. The conservatives, in a blistering letter on Wednesday, called on Majority Leader Mitch McConnell and his entire leadership team to step aside in frustration over a stalled agenda. A veteran House Republican warned that if the Senate fumbles tax reform after the failure on health care, the GOP could lose its House majority.

The criticism comes with the Senate gone for a weeklong break — and even that recess drew complaints.

"They're on another vacation right now. I think that we would all be a lot better off if the Senate would stop taking vacations, and start staying here until we actually get some real things accomplished," White House spokeswoman Sarah Huckabee Sanders said Tuesday.

The Senate returns next week with the intention of passing a budget that would clear the way for Congress to tackle a revamp of the tax code.

The Republicans' internecine strife was on full display as conservatives are still angry about the collapse of health care and GOP lawmakers fear failure on taxes will cost them politically in next year's midterm elections. Adding to Republican woes is former White House adviser Steve Bannon's declaration of war on the GOP establishment and promise of a primary challenge to every incumbent facing re-election next year with the exception of Texas Sen. Ted Cruz.

The Trump-Corker fighting, with the senator suggesting the president would lead the U.S. to World War III and Trump belittling the lawmaker, left House Speaker Paul Ryan asking for detente.

"I think it's just talk it out among yourselves," Ryan told reporters on Wednesday. "I think my advice is for these two gentlemen to sit down and just talk through their issues. I think that's the best way to get things done."

The conservatives would have none of it.

In their letter, they slammed McConnell for Congress' inability to repeal and replace Barack Obama's Affordable Care Act after promising for seven years that it would, the lack of progress in building a wall on the southern border, the delay on tax reform and the inability of Congress to stop federal funds for Planned Parenthood.

"Republicans were given full control of the federal government. They — you — have done nothing. Worse, it is painfully clear that you intend to do nothing because, as is most apparent, you had no intention of honoring your solemn commitments to the American people. You were not going to 'drain the swamp.' You are the swamp," wrote conservatives, including Jenny Beth Martin of the Tea Party Patriots and Ken Cuccunelli II, president of the Senate Conservatives Fund.

McConnell's office had no immediate comment on the letter.

Separately, in a blog post, 11-term Rep. Steve Chabot of Ohio lit into the Senate.

"If the Republican Senate blows it again, like they did with health care, the House is more likely to feel the pain. That's because only a third of the Senate is up for re-election next year, and 10 of those Senate seats up for grabs are Senate Democrats who are in states that Donald Trump won. So Senate Republicans should do pretty well next year, despite their lousy record," Chabot wrote.