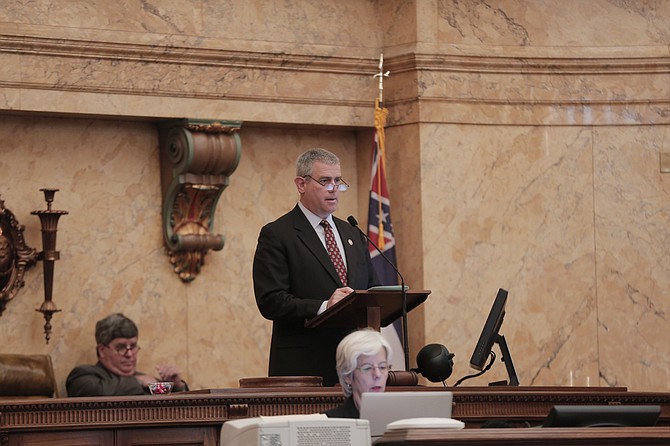 House Speaker Philip Gunn, a Republican from Clinton, formed the group but says "the lottery is not the windfall that all its supporters claim it will be." Photo by Imani Khayyam.

JACKSON, Miss. (AP) — Mississippi House Speaker Philip Gunn said weeks ago that he would form a group to study the pros and cons of starting a state lottery. As the group met for the first time Wednesday, Gunn repeated his opposition to the game of chance.

"I do not believe a lottery is based on sound economic policy, and it violates a number of conservative, Republican principles," Gunn, a Republican who is also a leader in his local Baptist church, said in a news release.

"The purpose of the study group is to gather information to show that the lottery is not the windfall that all its supporters claim it will be," he said. "I have not had anyone who has voiced support for the lottery provide me with any documentation showing why or how it is a good thing. At the very least, I hope the findings from this group will provide us with information upon which we can make an informed, reasoned decision."

Mississippi is one of six states without a lottery, according to the National Conference of State Legislatures.

Some legislators have tried for years to start a lottery in this state, but those proposals have faltered amid opposition from conservative religious groups and, to a lesser extent, from casino interests.

Republican Gov. Phil Bryant said in his State of the State speech in January that Mississippi should consider starting a lottery because the state is losing money as residents drive to Arkansas, Louisiana and other places to buy tickets, particularly when they're tempted by multimillion-dollar jackpots.

Bryant is calling lawmakers back to the Capitol for a special session starting June 5 so they can set budgets for the Department of Transportation and the attorney general's office for the year that begins July 1. He has not released a full agenda for the special session and has not said whether he will include consideration of a lottery.

The lottery study group met Wednesday at the Capitol, though no public notice was given in advance.

One of the most persistent lottery proponents in the House, Democratic Rep. Alyce Clarke of Jackson, was not appointed to the study group.