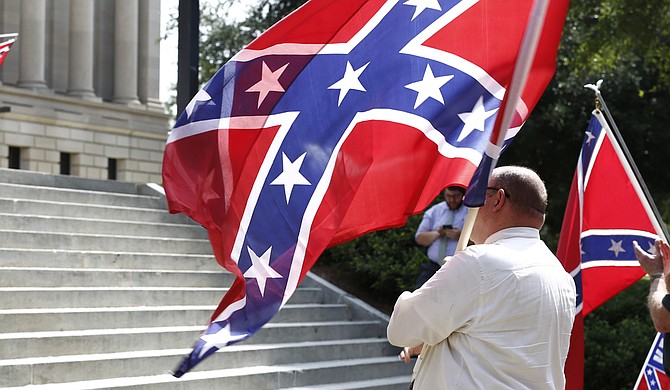 In part of a sweeping debate about the public display of Confederate symbols across the South, some black legislators in Mississippi say they are boycotting a regional meeting that their own state is hosting this summer, to protest the rebel emblem on the state flag. Photo by Imani Khayyam.

JACKSON, Miss. (AP) — In part of a sweeping debate about the public display of Confederate symbols across the South, some black legislators in Mississippi say they are boycotting a regional meeting that their own state is hosting this summer, to protest the rebel emblem on the state flag.

The Mississippi Legislative Black Caucus is asking the Southern Legislative Conference to push Mississippi to lose its status as the last state with a flag featuring the Confederate battle emblem — a red field topped by a blue tilted cross dotted by 13 white stars.

All eight of Mississippi's public universities and several counties and cities, including Biloxi, have stopped flying the flag because of the Confederate emblem. Most have done it since the June 2015 slayings of nine black worshippers at a church in Charleston, South Carolina. The man later convicted in the killings was an avowed white supremacist who had posed for photos holding the Confederate battle flag.

The Mississippi Legislative Black Caucus chairwoman, Democratic Rep. Sonya Williams-Barnes of Gulfport, said Tuesday that the boycott is designed to put pressure on state House Speaker Philip Gunn. Soon after the Charleston shootings, Republican Gunn, who is white, said his Christian faith led him to see the Confederate symbol as "a point of offense that needs to be removed" from the Mississippi flag. But, he has not rounded up the votes to make a change.

Gunn is chairman of the Southern Legislative Conference, with members from 15 states. The group holds its annual meeting July 29-Aug. 2 in Biloxi. Gunn said in a statement Tuesday that SLC "is a well-respected organization" and the meeting will "showcase the positives of Mississippi."

"It brings a great amount of economic benefit to the state, attracting nearly 1,000 people," Gunn said. "This event is a good opportunity to stand with me, someone who has not wavered in my support of changing the flag, to promote all that is good about our great state."

Critics say the Confederate symbol is a divisive reminder of slavery and segregation in a state with a 38 percent black population, but supporters say it represents history that should not be forgotten.

Mississippi has used the same flag since 1894, and voters chose to keep it in a 2001 election.

Williams-Barnes told The Associated Press that the Black Caucus has not united around a new design proposal.

The executive director of the Council of State Governments' Southern Legislative Conference, based in Atlanta, was traveling and did not immediately return a message.

During the legislative session that ended in March, several bills proposed redesigning the flag and some others proposed financial punishment for universities that have stopped flying it. All died because Gunn and other leaders said there was no consensus among lawmakers to either reject or protect the flag.

Fifty-one of Mississippi's 174 state lawmakers are black, and 50 of them are in the Black Caucus. Williams-Barnes said a majority of caucus members voted to boycott the regional conference, and about 80 percent are planning to take part in the boycott. She said she will ask black legislators from other states to stay away, as well.