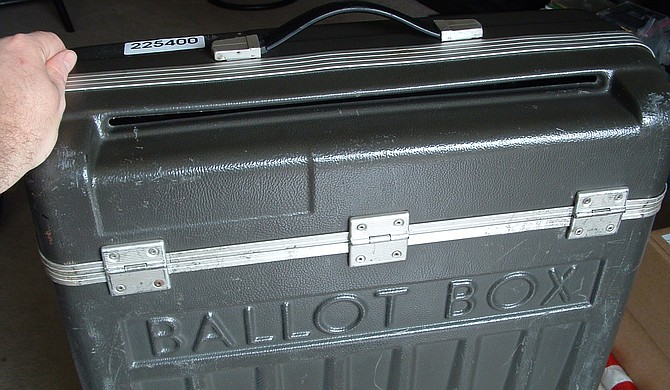 State law allows voters who are 65 and older, or will otherwise be unavailable to vote on election day, to cast absentees through the mail or in person at a city registrar's office for municipal elections or circuit clerk's office for all others. Photo courtesy Flickr/Joe Hall

Candidates in Columbus and Lowndes County the past 40-plus years likely know at least one, if not all, of these women and might have used their services. The three, and others, have built a loyal following of elderly and disabled citizens for whom they provide witness signatures on absentee ballots — election after election.

State law allows voters who are 65 and older, or will otherwise be unavailable to vote on election day, to cast absentees through the mail or in person at a city registrar's office for municipal elections or circuit clerk's office for all others. Most absentees must be signed and witnessed by a notary public or court clerk. But in cases where voters are illiterate or temporarily or permanently disabled, anyone at least 18 years old can provide a witness signature on their mail-in absentee ballots.

That's where these women pick up the slack by gathering absentee votes, either as volunteers or as paid agents for a candidate.

"I go to people I've been going to for years," said Deloach, noting she has helped elderly and disabled voters with absentees for 45 years. "I know them. They know me. I just go out and assist them on making sure they cast a legal, valid absentee ballot. ... When I go out and help them, they know their vote's going to be counted."

Their efforts can change an election.

In the May 2 Democratic primary in Columbus, Eric Thomas led incumbent Ward 2 councilman Joseph Mickens, 180-177, before absentees were counted, and the two seemed headed for a May 16 runoff. Mickens, however, overshadowed Thomas 178-15 in the absentee tally, earning more in absentees than election-day votes and securing re-election with 54 percent of the vote.

In the Ward 4 councilman race, incumbent Marty Turner overcame a 76-vote deficit to Frederick Jackson on May 2, using a 111-23 advantage in absentees to place first in the four-candidate primary by 12 votes. However, Jackson beat Turner two weeks later in a runoff.

Councilman Mickens said his wife volunteered for his campaign, but she and paid staffers combed the voter rolls to identify areas with disabled citizens where they could canvass for absentee votes.

"Absentees are part of the game," he said. "Those people have the right to vote."

Still, Mickens said he is never present when an absentee vote is cast and doesn't know either his wife's or staffers' methods for procuring them.

For Deloach, the process is simple. Either she contacts voters, or they contact her, to identify who needs an absentee ballot. She visits their home and watches as they call the necessary office— the city registrar's or the circuit clerk's — to claim their disability and request an absentee ballot be mailed to them.

Once the ballot arrives, voters call Deloach to return to their home and she helps them complete it. Sometimes that means explaining the ballot and letting them do the rest. Other times, it means reading them the ballot and allowing them to choose a candidate. It could mean helping a voter fill in the bubble by a candidate's name.

"Say I have a voter who has Parkinson's or some other reason where they may have trouble filling it in," Deloach said. "I always wait until I see which bubble they start to fill in, and then I may guide their hand and help them fill out the rest. But I always make sure they've started it themselves before I help like that."

After she assists, she makes sure the voters sign or make their mark on the ballot envelope, then she signs the witness line and the voter mails the ballot.

Deloach said Mayor Robert Smith paid her to canvass Columbus to witness absentee votes for disabled citizens who might not otherwise get to the polls, meaning she signed dozens more ballots than the 32 she witnessed for the May 2 race in Ward 4.

In the mayor's primary, which featured three Democratic candidates, Smith received 943 of the 1,069 total absentee votes cast. However, Deloach said she refuses to influence voters when she witnesses absentees, saying Smith also never asked her to.

"He asked me to do this with the understanding all the votes weren't going to be for him," she said. "Some were. Some weren't. He didn't ask and I didn't tell him.

"I'm not going to jail for any candidate," she said.

Deloach she was paid enough to cover "my gas, my food and my time."

Smith, in an emailed statement to The Commercial Dispatch, denied paying Deloach.

The Commercial Dispatch could not obtain contact information for Patricia Brooks or Judy Lewis.

In Columbus, 1,069 absentee ballots were cast May 2 — many more than in cities of similar and larger size across the state. Meridian, which is larger than Columbus, had 402 absentee ballots citywide, trailed by Starkville (194), Hattiesburg (125), Tupelo (120), Vicksburg (89) and Pascagoula (58).

Currently, there's no legal limit on the number of times the same person can provide absentee voter assistance in an election, according to the Mississippi Secretary of State's office. However, Mississippi law bans paying citizens for their vote.