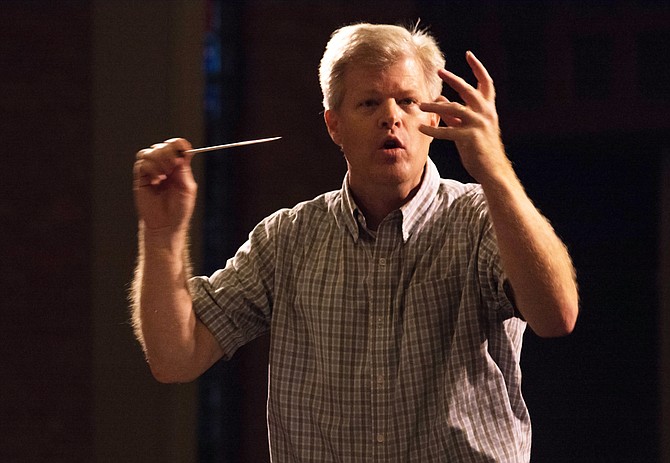 "It's outta here," said "Voice of the Tribe" Tom Hamilton, who has called 28 seasons of Cleveland Indians baseball games since 1990. Rookie player Bradley Zimmer had hit the second homerun of the game in the third inning against the Kansas City Royals on June 3.

Young graduated from Bowling Green State University with a bachelor's degree in music education in 1988. He received his doctorate degree from Ohio State University in 1998. In 1999, he moved to Clinton from Canton, Ohio, to become the director of bands at Mississippi College. He has taught at the college for 18 years, conducting all the bands and teaching saxophone and instrumental music education.

The stars aligned in Young's first year in Clinton. The Mississippi Symphony Orchestra needed a saxophone soloist for a concerto that he already knew how to play, and one of the adjunct faculty at Mississippi College was conducting.

"My first year here, I got to solo with the MSO," he says. "Thinking about it now, that's crazy. It was just luck. I got to meet all of the MSO people, and it gave me a quick introduction."

Young decided that he wanted to play more with professional musicians and not just a community band. After his introduction to the MSO, he thought about creating a group of professionals who would be willing to play during the summer when the symphony wasn't performing.

In 2001, he formed the Mississippi Wind Symphony, and the group has performed two concerts in every June since.

The Mississippi Wind Symphony is composed of more than just MSO players, though. Young says that the group also includes several high-school and college band teachers, as well as a few players who don't make their livings through music.

Despite the quality of musicians that participate in the Mississippi Wind Symphony, none of the members are paid to play, he says.

"People ask me, 'Why do these professionals take time out of their busy schedules and do something they get paid to do every other day and do it for free?'" he says. "Nobody gets paid for this, including myself, and I don't know the answer to it. I'm sure it has to do with (the fact that) they love to play, and they love to play together."

His best guess, he says, is that the musicians enjoy playing for the Mississippi Wind Symphony because they get to play more than usual.

On Tuesday, June 27, the Mississippi Wind Symphony will do a concert called "The American Experience," which will feature music from moments in American history, from 7:30 p.m. to 8:45 p.m. at the Belhaven University Center for the Arts (835 Riverside Drive). The event is free to attend and open to the public.