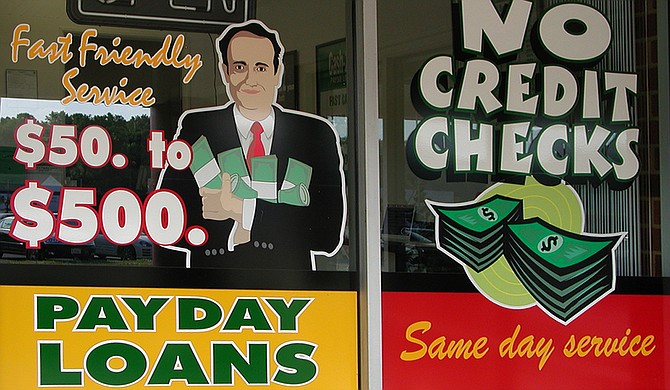 One of Mississippi's largest payday lenders was effectively forced out of business Wednesday after a judge ruled that state banking regulators could revoke the company's licenses during its appeal of state penalties. Photo courtesy Flickr/Taberandrew

JACKSON, Miss. (AP) — One of Mississippi's largest payday lenders was effectively forced out of business Wednesday after a judge ruled that state banking regulators could revoke the company's licenses during its appeal of state penalties.

Hinds County Chancery Judge Dewayne Thomas last month had temporarily blocked penalties against All American Check Cashing by the state Department of Banking and Consumer Finance. But he ruled late Tuesday that he wouldn't reinstate All American's licenses to cash checks or make loans while the company fights the state agency.

The Madison-based company appealed Wednesday to the Mississippi Supreme Court, arguing that even temporary enforcement of penalties handed down by the state Department of Banking and Consumer Finance "is the equivalent of the death penalty" for the company.

"Without a stay of enforcement to preserve the status quo during All American's appeal, All American will be financially devastated with absolutely no recourse or path to being made whole when the appeal is successful," lawyer Michael Cory Jr. wrote.

Federal and state regulators in 2014 accused All American of a systematic scheme orchestrated by corporate leaders to evade Mississippi's prohibition against rolling over payday loans by pushing customers to pay only interest and continue the loan. Consumer advocates have long fought that practice, because borrowers continue paying sky-high interest rates.

After a monthslong proceeding, the Banking Department revoked the licenses May 11. Banking Commissioner Charlotte Corley also ordered the company to pay civil fines of $1.62 million and pay refunds totaling almost $135,000 to more than 700 customers. All American says the largest penalty ever previously imposed by the department was about $50,000.

Thomas ruled All American could postpone paying $1.62 million in fines while it fought Corley's action by posting a $500,000 bond, but ruled customer refunds should proceed.

The U.S. Consumer Financial Protection Bureau is suing All American in federal court in Jackson, seeking to force repayment to more customers.

All American strenuously disputes the enforcement actions, saying regulators are biased, that examiners in the 2014 raid forced employees to answer questions using threats of jail time, and concocted bogus customer complaints. The company says Corley improperly inflated the number of violations to increase fines, failed to provide enough evidence to revoke licenses, and has no power to order customer refunds.

"The underlying case is one of an administrative agency grossly overreaching its statutory authority and violating fundamental substantive and procedural due process rights," Cory wrote Wednesday.

The dispute has been bitter and personal, with the department alleging All American bought Facebook ads claiming a key regulator patronized the extramarital affair-facilitating Ashley Madison website, and claiming that an All American-produced video misrepresenting the department's actions was shown to legislators.